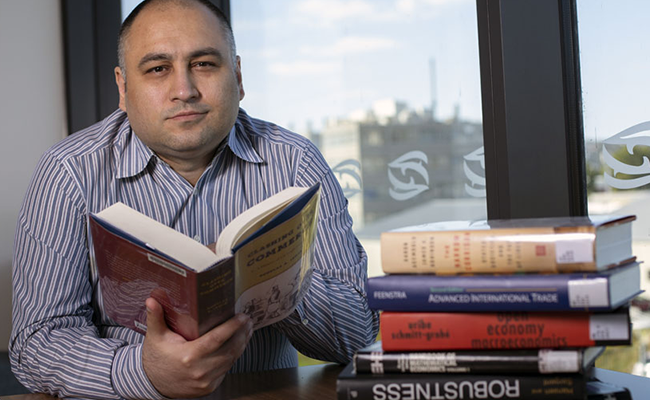 Based in the Department of Economics, Senior Lecturer Dr Murat Üngör shares his advice for students considering study at the Otago Business School and how this led to his own research.

“Constructing and analysing economic models teaches us a lot about the world we live in,” Dr Üngör says.

“These require mathematical ability and analytical thinking, which are important skills for every student of economics and so I would encourage students to be ready to engage with the data presented to them and the economic analysis that comes with this.”

Dr Üngör also suggests that budding economics students take the time to learn about the programming of mathematical and statistical procedures and that there are free, general-purpose programming languages available for anyone to learn such as Python and Julia.

At his core though, Dr Üngör believes that for students to produce good research they need to come up with good ideas and that “life is full of these good ideas”.

“Take the time to read a newspaper or a magazine, engage in conversation with businesspeople and policymakers and play around with data you can find to gain insight into a phenomenon that you might be interested in,” Dr Üngör says.

“After all, the most important thing you can have as a student is endless curiosity, a passion for learning and discovery; they are sine qua non for research.”

He believes that it was this type of thinking that led him to his own personal research pathway, as he wanted to understand more about structural transformation -the reallocation of economic activity across different sectors- in a global world.

Dr Üngör explains that the world relies on an interdependent global economy where it is important to understand the different mechanisms that generate differences in allocation of production factors in developed and developing countries.

“These models encompass all economic activity in an economy simultaneously, including production, consumption, and trade, as well as the linkages between them.”

Dr Üngör has published several works in this line of research, the results of which have the potential to help policy makers in mature economies as well as those in less developed countries understand how the mechanisms behind different structural transformation experiences interact.

“My related research is continuously being cited in global economic-policy related documents such as the World Bank’s ‘Global Productivity: Trends, Drivers, and Policies’ study, as well as the 2020 ‘Global Economic Prospects January Report’; and in top academic journals in economics such as the Journal of Political Economy,” Dr Üngör says.

“Seeing my work cited is highly rewarding, because it’s tangible evidence that the research you are doing is contributing to the world around you and passing knowledge to future generations and I hope that students are also excited by this prospect and aim to learn as much as their curiosity calls for so that they can also experience the practical good that can come from research.”