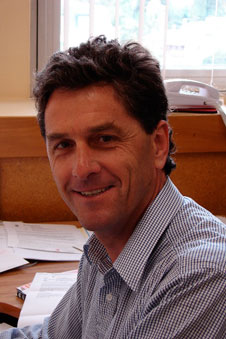 Otago’s Professor Rob Walker hopes his new position on the International Society of Nephrology (ISN) Council will give him the opportunity to support programmes in the Pacific Islands where up to half of the population of some countries have kidney disease.

Professor Walker, who is the Head of the Department of Medicine at Otago's Dunedin School of Medicine, has been elected to represent the Australia, New Zealand and Polynesia region on the ISN Council for a six-year term ending in 2021. He is the first New Zealander to hold this position for 20 years, and it is a real honour for him and the University of Otago.

“This is an important international organisation doing amazing things,” he says.

The International Society of Nephrology (ISN) was established in the 1960s and leads the worldwide advancement of education, science and patient care in nephrology. It is dedicated to addressing the disparity between the developing and developed worlds in the research, diagnosis, treatment, and prevention of kidney disease – something close to home for Professor Walker.

Samoa’s high rates of chronic kidney disease are likely due to a number of factors, including the influence of the Western diet, the impact of diabetes and high blood pressure, and a lack of preventative programmes, Professor Walker says.

He has been in Samoa recently, working with local doctors who want to establish a chronic kidney disease programme.

“The ISN has up to $50,000 (USD) available to support a programme, but a programme must be devised by them, as they know what is required in their population. I spent a week in Samoa meeting the relevant people, talking to local doctors and looking at how they can apply to get funding.

“It can't be solved overnight; it needs a lot of work. But there is incredible enthusiasm from doctors over there to get started.”