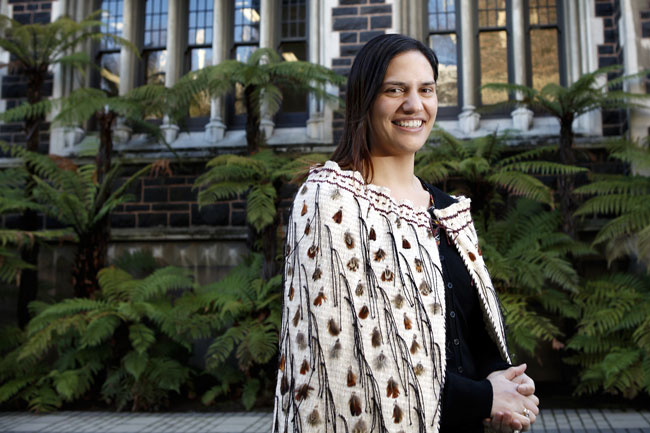 Dr Karyn Paringatai of Te Tumu – School of Māori, Pacific and Indigenous Studies with the korowai which will be given to New Zealand’s top tertiary teacher at the National Tertiary Teaching Excellence Awards. Photo: Sharron Bennett.

Dr Paringatai, of Te Tumu – School of Māori, Pacific and Indigenous Studies, won the award last year for her work teaching Māori performing arts and te reo Māori to people from a wide variety of backgrounds, in particular her revival of the ancient practice of teaching in the dark and subsequent research into its benefits.

"It enhances the whole experience of winning the award last year and all the opportunities that have come my way since."

The korowai is a chiefly garment that recognises the mana of the supreme award and the person who receives it. This korowai is called Rauaroha, a name derived from Māori mythology for a place where knowledge was received. It is made entirely of muka (flax fibre) and bird feathers and took six months to create.

Ngahiwi Apanui, the Deputy Director Māori at Ako Aotearoa which administers the awards, says Veranoa allowed her hands the luxury of just three weeks rest during all of the time she was making the korowai.

Dr Paringatai has had the honour of caring for the korowai for just a few short weeks. It was placed on her shoulders on 8 July when she gave her first ever Keynote Presentation at the Tuia Te Ako Conference held at Lincoln.

“Prior to speaking I was so nervous because I had never talked about teaching in the dark to a predominantly Māori audience, or given a keynote presentation, but as soon as the korowai was placed on me I felt an overwhelming sense of calmness. I don’t know why I was so nervous in the first place!”

Dr Paringatai says she has never worn a korowai and has certainly never been in charge of caring for one.

“It enhances the whole experience of winning the award last year and all the opportunities that have come my way since.”

She will pass it to the next supreme award winner at the 2015 Tertiary Teaching Excellence Awards next week.

“It is such an exquisite piece of work. I’ve seen the amount of effort put in to make a single strand of muka and for the whole thing to be made from muka is amazing. It is such an honour to be able to wear it and to care for it, even if only for a few weeks. I know the next winner will appreciate it just as much.”