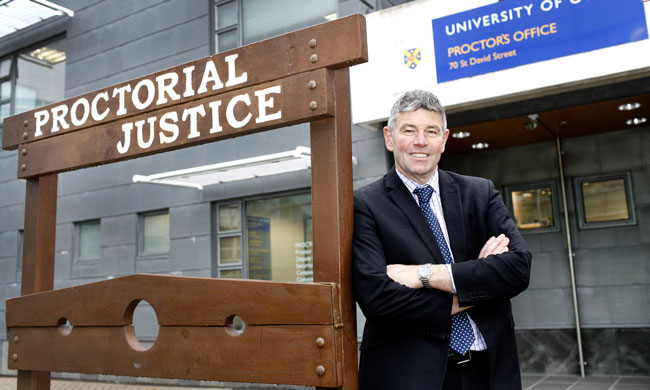 The University of Otago has appointed Ministry of Justice official Mr Dave Miller as its new Proctor.

His new role as Proctor will include monitoring and positively influencing student behaviour and safety, on- and off- campus, and supervising the five Campus Watch Team leaders and their 40 members. He will also be responsible for Emergency Management at the University.

Announcing the appointment, Vice-Chancellor Professor Harlene Hayne said that she was delighted that someone of Mr Miller’s calibre and experience will take up this important position in the University community.

“Mr Miller’s previous employers have consistently noted his collegiality, professionalism, leadership qualities and problem-solving abilities. These are crucial attributes for successfully carrying out his new role.”

He has wide experience in key operational and strategic roles in the Police, most recently as Southern District Operations Manager from 2011 to 2013. Among his many other roles were Policing Development Manager, Central Otago Relieving Area Commander, and the Dunedin Armed Offenders Squad (AOS) Commander.

In addition to his management roles, he has extensive experience as a senior sergeant. While in charge of the Mosgiel police station he established partnerships with the local community that reduced rates of youth vandalism in the suburb.

In 2011, he was part of a New Zealand Police contingent in Afghanistan and assisted with the training of staff and recruits at the Regional Police Training Centre in Bamyan Province. During a 2006 deployment to Solomon Islands he mentored and trained Honiara Police and was the New Zealand AOS Commander within the joint forces serving in that country.

Welcoming Mr Miller’s appointment, the University’s Director of Student Services, Ms Karyn Thomson said that a wide cross-section of the University community had been involved in the selection process for the new Proctor.

Mr Miller says that he is looking forward to taking up the role and interacting with students, the vast majority of whom come to Otago to work hard towards their qualifications.

“The University is very important to Dunedin, as is the City to the University. My job includes working to ensure the campus continues to offer a safe and secure learning environment in which students treat each other and their community with respect,” he says.

Mr Miller will take up the position on Wednesday 28 October. Current Proctor Mr Simon Thompson retires at the end of this week (Friday 25 September).