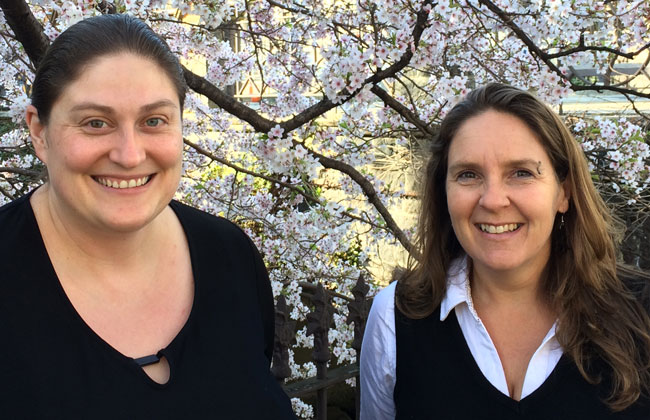 Dr Roslyn Kemp (right) with colleague Dr Joanna Kirman, who nominated her for the prestigious Association for Women in the Sciences Miriam Dell Award.

Dr Kemp, a senior lecturer in the Department of Microbiology and Immunology, was this week recognised with the Award for her work with students and for furthering the goals of the Women’s Initiative of the Australasian Society for Immunology.

A major component of the initiative is to provide mentorship opportunities for female immunologists at all stages of their career. Launched in December 2013, it sees Dr Kemp match mentees with suitable mentors that meet their needs, as well as ensuring they have compatible skills and qualities.

Since its introduction, more than 85 mentors have been added to the Women’s Initiative programme, and more than 25 mentoring relationships have been established. At Otago alone, some 14 staff and senior students in immunology are participating in the mentoring programme.

"Roslyn is a consistently strong and enthusiastic mentor for women in science, and I believe she has made a significant, tangible difference to many careers."

Dr Kemp, who also won a University of Otago teaching award this year, says she is proud and honoured to have been given the award.

“It’s really important for women scientists to have access to peer support and encouragement that will help them progress in their careers, particularly since they are fewer in number,” she says.

She adds that the mentoring model used by the Immunology Society could be used by other professional societies to help women across the scientific disciplines.

University of Otago immunologist Dr Joanna Kirman, who nominated Dr Kemp for the Award says she has an outstanding ability to inspire female students at graduate and postgraduate level.

“As an undergraduate teacher she is exceptional, and this has contributed to a dramatic increase in the number of female students in Immunology in recent years. She has an inclusive and unselfish approach to mentoring, with a special emphasis on supporting young female Māori students into postgraduate study. Roslyn is a consistently strong and enthusiastic mentor for women in science, and I believe she has made a significant, tangible difference to many careers.”

The Miriam Dell Award for Excellence in Science Mentoring was introduced in 2013 and is awarded on a biennial basis to someone who demonstrates outstanding mentoring efforts to retain females in science, mathematics or technology. It was named for Dame Miriam Dell, Patron of AWIS, botanist, secondary school teacher and advocate for women’s advancement.