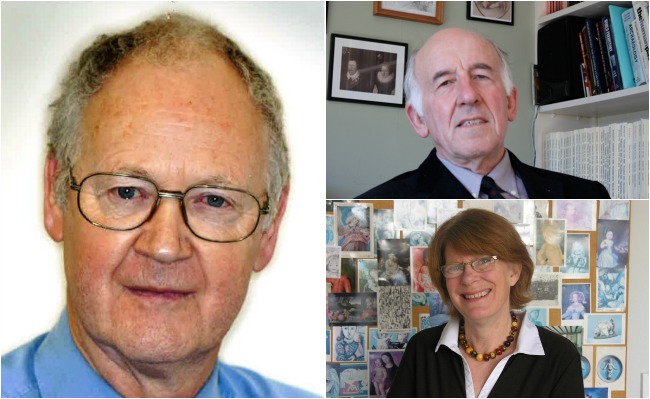 Professor Charles Higham hopes Richie McCaw and Dan Carter will be at the New Year Honours investiture ceremony in April so that he can tell them how much he enjoyed watching last year’s Rugby World Cup final.

Professor Higham of Anthropology and Archaeology was one of four Otago staff members to be recognised in this year’s New Year Honours. He was appointed an Officer of the New Zealand Order of Merit (ONZM) for services to archaeology. Professor Helen May of the University’s College of Education and Professor Kevin Pringle of the Wellington Campus were also made Officers of the Order for services to education and services to paediatric surgery respectively, while Dr Cecilia Smith-Hamel received a Queens Service Medal (QSM) for services to mental health.

"...leaving home for so long year in and year out places a huge burden on my wife Polly, for much of the time looking after a large garden and four growing children."

Professor Higham says receiving the honour was a huge surprise, and probably the “furthest thing” from his mind during his 45-year career.

In 1968, when he was just 28, he was appointed to the University’s Foundation Chair of Anthropology, working to build the department on the “strong foundations laid by my predecessors”.

During this time he also conducted 28 seasons of excavations in Southeast Asia, the longest lasting seven months.

“My fieldwork involves a large team of specialist colleagues, and leaving home for so long year in and year out places a huge burden on my wife Polly, for much of the time looking after a large garden and four growing children.”

Professor Helen May says she was humbled to receive a New Year Honour, particularly as her career “inches towards retirement” at the end of 2016.

Professor May’s honour recognises her 50-year career in the service of education, which she began as a primary school teacher.

"Attitudes and politics have shifted to the extent it became possible to become a professor of early childhood in a university!"

“When my teaching career started such an honour would seem an unlikely outcome for a junior school teacher who mainly taught new entrants and later worked in childcare. When I became involved in childcare in the 1970s there was no government funding and as a parent user of childcare and as worker, we were on the ‘outside’ of respectable work or parenting!”

She says likewise, as a student of education, there was no place for early childhood education in a university.

“Attitudes and politics have shifted to the extent it became possible to become a professor of early childhood in a university! Still amazes me! And there is still much unfinished work.”

Professor Pringle of the Wellington campus is a leading paediatric surgeon, lecturer and researcher in New Zealand.

"It is also a tribute to the tremendous teams that I have had the privilege to work with over the years."

“To a very real extent, the recognition is not just for me, but also for my family, who have missed out a lot over the years,” he says. “It is also a tribute to the tremendous teams that I have had the privilege to work with over the years. The Neonatal Unit in Wellington is one of the best in Australasia, and it has been great to work so closely with my Paediatric Colleagues not only in Wellington, but also in other centres served by CCDHB. I have also been extremely fortunate to have worked with some fantastic nurses both in Theatre and on the wards. Without them, what I accomplished would not have been possible.”

Dr Cecilia Smith-Hamel of the Christchurch campus has been working tirelessly to improve the quality of life for her patients for more than 15 years, and has been attributed with shaping the Timaru mental health service into a centre of excellence.

She has served as a consultant and researcher at the University of Otago since 2000.