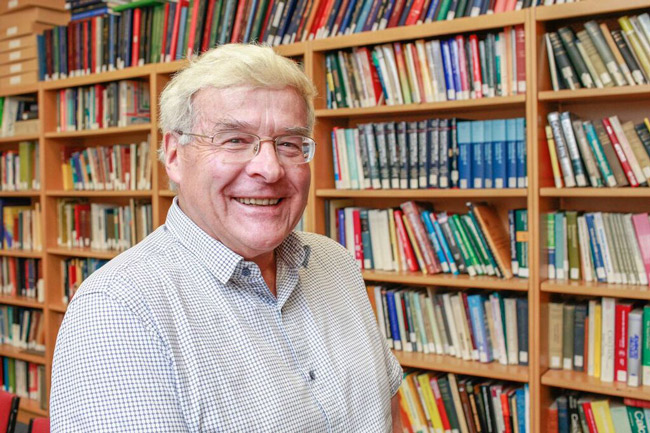 Reflecting on ... Statistics Associate Professor John Harraway has a career longer than most to enjoy looking back on. Photo: Sharron Bennett.

Statistics Associate Professor John Harraway has been teaching at Otago for half a century and can easily calculate the number of sick days he has taken in that time – zero, because he enjoys lecturing so much.

The genial 72-year-old says he is lucky because “we have the highest achievers in the age group coming to this University and it’s a pleasure to teach them. The interaction you get is very positive.

He is also now teaching the children of some former students, but adds with a chuckle that he has not lectured any of their grandchildren yet.

The senior lecturers’ teaching responsibilities have included large classes in business, biological sciences and biostatistics; for students entering medicine, dentistry, pharmacy and physiotherapy. He received an award from the University for excellence in teaching in 2010, and has been Chief Examiner in Statistics for the New Zealand Qualifications Authority.

Associate Professor Harraway’s speciality has also taken him around the world, sparking encounters with locals in many countries that have not only given him great joy but stories to tell, which he does with a twinkle in his eye and a well-loved and enthusiastically delivered punch-line.

He takes a similarly relatable approach to his teaching by focusing on the way statistical research is being used “out there in the real world”, and can include examples of his own work. He has been working with a PhD student in Zoology to study the behaviour of dolphins along the coast of Egypt and how they inter-act with humans.

He and a research student in Marine Science discovered more than a decade ago that while Hector’s dolphins like to play around tourist boats by surfing the bow, they will take off after about 40 minutes, suggesting that letting tourist boats follow the dolphins would interfere with their habitat.

Associate Professor Harraway and chemistry colleagues have also helped protect the market for locally-grown Ginseng in Wisconsin, in the United States, from illegal imports from Canada and China.

They found out what elements the fleshy roots of the plants absorbed from the climate and soils from farms in those areas then established the probabilities of new ginseng samples originating from each of the three countries. That theory is currently part of a court case in the United States, based not only on Otago’s work but research at the University of Wisconsin which replicated Otago’s results.

He and Human Nutrition also helped create a profile of the women most likely to drink alcohol while pregnant - they were generally the bingers. That work was part of a drug and alcohol review, and the subject of six research papers.

Lately, he has been working collaboratively on free mobile phone apps that train people in public service roles how to use official statistics, which has sparked interest from Mozambique, Angola, Malawi, Kenya, Egypt, Vietnam and Ethiopia.

Associate Professor Harraway never expected to end up doing any of that work or to write books when he started studying mathematics at the University of Otago. He was not even thinking about what job he would do afterwards, but it turned out to be assistant lecturing in mathematics at Otago.

Then, New Zealand’s first Professor of Statistics Geoff Jowett appointed him as a lecturer, and seven years later he moved into statistics.

Soon after he joined the staff, Vice-Chancellor Sir Robin Irvine suggested he apply to review Khon Kaen University in north-east Thailand, where a medical school and hospital were being built. The World Bank was putting a lot of money into the development so wanted the sciences to be strengthened and relevant to north-east Thailand.

The Mekong River in Laos.

With the Vietnam War raging nearby, Associate Professor Harraway and three New Zealand colleagues travelled around the north-east to do their work. Then, the New Zealand Embassy in Bangkok asked two of them to go to Laos - where communists had just captured the capital - to check on an Ashburton girl who had married a Laotian engineer.

The academic pair were paddled in a canoe across the Mekong River, passed through three communist road blocks, and slept for three nights on mattresses at a power station where the engineer worked, after establishing all was well.

Armed soldiers were guarding the strategically important power station, which Associate Professor Harraway found fascinating, so he took a lot of photos without realising how serious the consequences could have been if he was spotted.

His travels continued through attending conferences and joining the executive of the International Association for Statistical Education. He also served as president for two years from 2011, and received the New Zealand Statistical Association Campbell Award in 2013 for his contribution to statistics.

He has spent 18 years associated with Selwyn College hall of residence as well - including time as warden and on the board of governors - and has had a long association with the University Squash Club.

Associate Professor Harraway has seen the University change from pens to computers, and from blackboards to smart phones, while student numbers have risen from about three thousand to 21 thousand.

But he has started going in the opposite direction, cutting his hours to half-time and building up interests outside work. The statistician is calculating how to avoid having too much down-time whenever he retires.

He plans to keep up with the squash club and Selwyn College, already has a role with Lions, volunteers at Orokonui Ecosanctuary, has conferences to attend for years yet, and wants to help answer demand for the official statistics apps.