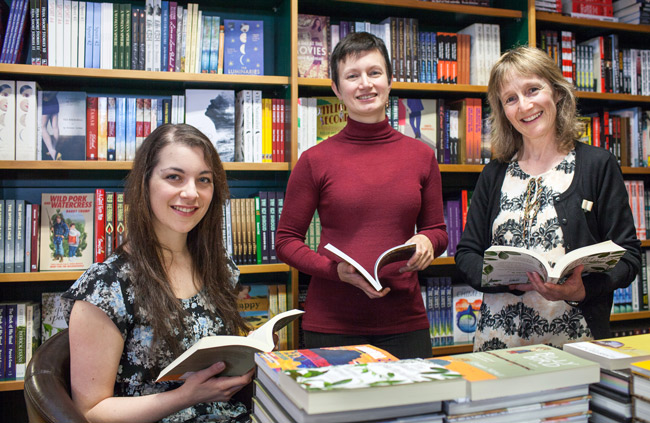 Otago’s first student of English to take the Division of Humanities' new internship paper, Aleisha Pienaar, is discovering Dunedin’s literary riches, working on a significant project for the Dunedin UNESCO City of Literature.

Mrs Pienaar’s supervisor, English Senior Lecturer Dr Simone Marshall says, “The paper is being offered to 300- and 400-level students, showing them, and local enterprises, that English degree skills can be applied in the real world. This first internship is also a fabulous example of collaboration between the University and the city.”

Mrs Pienaar says, “My task is to begin a database of literary hotspots in Dunedin. The idea is that the database could be used for many different literature-related events, research, celebrations, apps, the list goes on. Dunedin is a city truly rich with literature. We weren't awarded the special status of City of Literature by UNESCO for no reason!

"Her internship has given her networking, promotion, time-management, interviewing and writing to space – she has gained a greater appreciation of her English degree’s potential uses."

“As I am the first one to take on this massive task, I'm piecing together the groundwork. I’m collecting information about special literary locations in Dunedin and inputting it into spreadsheets, writing about a few of them, conducting short interviews, and creating a user-friendly space for someone to take over from me. The next person will add to the spreadsheets and write more, so the database will grow over time.”

Dunedin’s City of Literature Director Nicky Page says Mrs Pienaar came to work with her after “a key partner” in the City of Literature collaboration group, English and Linguistics Head of Department Dr Shef Rogers, asked if she would be interested in having an intern in 2017.

“I said we would like to have one for semester two this year,” Ms Page recalls. “I thought it would be fantastic for a number of projects that would otherwise be difficult to resource, so I came up with the database idea for the department’s consideration.

“Aleisha has done a tremendous job establishing what will be an enormous, on-going project. The information could feed into all sorts of planned initiatives. One is the possibility of a literary app allowing locals and tourists to identify significant literary places around the city and then burrow deeper, finding out where writers lived, where they met their friends, where they wrote, and even showing where fictional characters lived and maybe died, and where fictional events took place.”

Dr Marshall says, “Future English internships are being developed with the Otago Daily Times, Otago University Press and with the Highlanders franchise. Nicky has put her hand up for two more interns next year. It’s really getting us out there.”

Mrs Pienaar says that aside from the practical skills her internship has given her networking, promotion, time-management, interviewing and writing to space – she has gained a greater appreciation of her English degree’s potential uses.

“I have met so many authors, historians, teachers, activists and administrators who are highly appreciative of their qualifications and field of work,” she says.

“I want to be a writer, professionally, and now it seems possible. I even have willing mentors in the field since meeting them through this internship.”