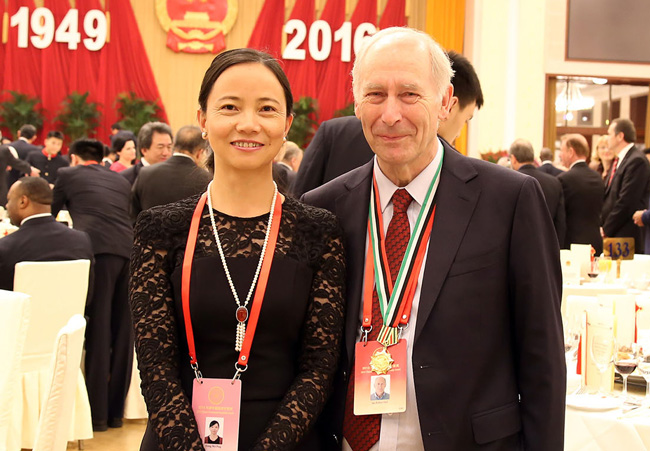 Dr Ian Hall (right) and his wife Professor Xiong Wei Ping at The Great Hall of the People of Beijing.

National Poisons Centre Honorary Fellow Dr Ian Hall is thrilled to have been awarded The Friendship Award by the Chinese Government for his contribution towards China’s economic and social progress.

The award recognised his work at the Lhasa-based Tibetan Academy for Agriculture and Animal Science (TAAAS).

"This is not a paid position and the New Zealand public are extremely fortunate to have Dr Hall’s assistance."

“We congratulate Ian and acknowledge the work that he also does for the National Poisons Centre and ultimately the rest of New Zealand. For the past six years, the Centre has relied on Ian’s expertise as a mycologist to assist with difficult or unusual mushroom and fungi poisonings,” Dr Tatley says.

“There are many highly toxic species of mushroom and fungi in New Zealand, so the Centre relies heavily on Dr Hall for his expertise - to get it wrong could cost someone their liver or even their life. This is not a paid position and the New Zealand public are extremely fortunate to have Dr Hall’s assistance.”

The People's Republic of China Friendship Award is that country’s highest honour for foreign experts who have made outstanding contributions to China’s economic and social progress. Dr Hall is one of only 12 New Zealanders to have received the award since 1991. The other recipient this year was Professor Hugh Blair of Massey University.

The award is such a prestigious honour that the award programme in September lasted for an entire week and included meeting with Premier Li Keqiang and the Vice Premier Ma Kai. Dr Hall also attended a banquet at The Great Hall of the People of Beijing with both the Premier and Prime Minister.

The winners are selected by the State Administration of Foreign Experts Affairs (SAFEA) under the State Council, and conferred as part of the celebrations for the National Day of the People's Republic of China. Award recipients receive a medal and award certificate.

"It was a real thrill when my PhD was conferred ... but these didn't come close to those few days in China."

Dr Hall says he initially thought it was nice his team’s work was being thought of, before realising he was one of only 50 awarded this year to all nationalities and out of 600,000 foreign experts in China.

“It gave Wei Ping and my TAAAS colleagues great joy that the very public ceremony was the first to be held in the Zhongnanhai (the Chinese equivalent of The White House in the USA), then the Great Hall of the People in Tiananmen Square.

“Eating in the same room as the President and Premier was an honour. Apart from the obvious grandeur of the occasion the one thing that stuck in my mind was the similarity of the Chinese people and those of New Zealand; it made it feel so much like home.

“It was a real thrill when my PhD was conferred, again when I was awarded a Royal Society of New Zealand medal, and bigger still when we harvested the first Southern Hemisphere truffle back in 1993, but these didn't come close to those few days in China. The next thrill will come when our work in Tibet has the desired impact on Tibetan agriculture, mushroom cultivation and more, and my Tibetan colleagues and I can look back and say that it was all worthwhile.”

Dr Hall currently divides his time between Dunedin, Lhasa and their home in Chengdu.

He says working at TAAAS, an organisation with around 500 staff, is a delight.

“That, plus living at 3650 metres high in Tibet where the scenery is best described to another Kiwi as Central Otago on steroids, being surrounded by a history spanning 5000+ years, and warm friendly people, made my time in Tibet a reward in itself.”