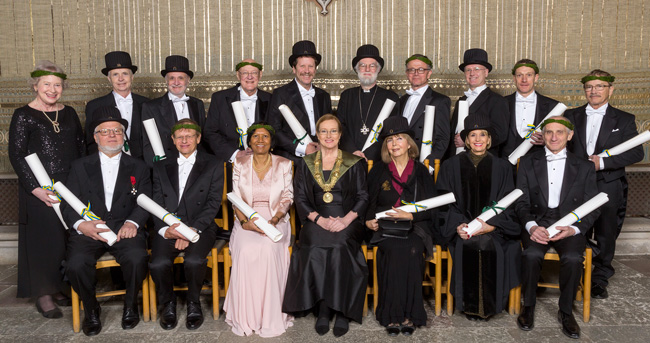 Professor Sylvie Chetty, from the School of Business, received her honorary doctorate at Uppsala’s winter conferment ceremony earlier this year.

The honour recognises Professor Chetty’s ongoing ties with Uppsala University which began in 1997 when she spent a year there on research and study leave.

"I grew up in apartheid South Africa and would have never dreamt of this achievement because of the barriers to my education based on my Indian ethnicity."

“At that stage I was a Senior Lecturer at Victoria University of Wellington. I chose Uppsala because the Department of Business Studies is a world leader in International Business Research. Professor Jan Johanson, a world leading international business scholar, hosted me during this research and study leave. I was touched that he attended the honorary doctorate seminar that I presented and the conferment ceremony dinner even though he is now in his 80’s and has retired.”

Professor Chetty spends at least one month each year at Uppsala on research and study leave, collaborating with researchers and presenting her work in research seminars.

Her nomination cites her close contacts with Uppsala’s Department of Business Studies, in which she is a “valued co-writer and co-worker in joint research projects”.

“She also plays a very large role in quality at the Department’s research seminars,” the citation says. “Through her positive, cooperative and competent presence, she creates enthusiasm among both younger and experienced researchers.”

For Professor Chetty the doctorate is a “great honour”.

“I grew up in apartheid South Africa and would have never dreamt of this achievement because of the barriers to my education based on my Indian ethnicity.”

The graduation ceremony was held in Uppsala Cathedral, followed by a celebratory banquet hosted by the Vice Chancellor at Uppsala Castle.

Uppsala is one of Otago’s Matariki partner universities, and is ranked in the world’s top 100 universities.