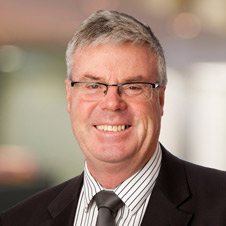 The University’s new Director of the Campus Development Division David Perry says his role will be as exciting as it is challenging, and such opportunities are rare.

The search for a Director for the new Division involved a strong recruiting campaign across New Zealand and Australia, which produced an excellent candidate pool.

Chief Operating Officer Stephen Willis says Mr Perry was an exceptional choice, having been involved in project management in New Zealand and Australia for 20 years.

“Like all good Project Managers, he comes with a wealth of diverse experience, having previously been a senior quantity surveyor, a contractor-side Construction Manager, and a Commercial Manager for a New Zealand-based contractor.”

Otago has started the largest, most complex and most expensive building programme in the University’s history - believed to be the second largest development programme in the entire country – and Mr Perry says that is providing a rare opportunity for him.

The job he starts full-time today involves not only successfully delivering the new buildings, but also bringing together the existing Strategy and Planning Unit and Capital Projects Unit to create a strong, performing team.

Because many of the University’s buildings are 40- to 50-years-old, there are also several pressing demands for refurbishments or replacements, so determining priorities will be a challenge as well.

Mr Perry’s other key focuses will include developing standard procedures for the planning and delivery of projects, and working with others in the Operations Group to update the Campus Master Plan.

He believes his experience as a project director of major, complex projects will help provide the leadership and guidance needed for the role – as a leader, he values “teamwork, the opinions of others, integrity and accountability.”

Mr Perry has been the temporary Manager of the University’s Capital Projects Unit for 10 months, while simultaneously a Director of the Project Management Division for global real estate and project management company Savills.

“I have found the University environment stimulating. Not only the beauty of the campus, but also the intellect of members of the academic staff involved in the projects, and the enthusiasm of the students too.

Mr Perry says he and his wife Louise both grew up in Dunedin and lived in the city before moving to Wellington for work about 30 years ago.

The couple has also lived in Christchurch and Adelaide for his work, are shifting back to Dunedin for his new role, and “still have a fondness for our home town.”