They stress that the broader environmental effects of commercial fishing on biodiversity, endangered species, seafloor habitats and the very ecosystem that supports the fish on which fisheries depend is becoming increasingly clear.

We reproduce their Opinion Piece here on the Otago Bulletin Board. 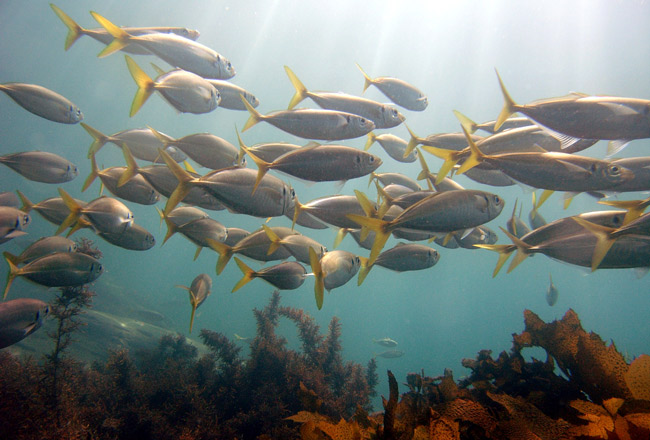 Indeed, New Zealand’s fisheries have been ranked among the best managed in the world - an accolade based on the early and wholehearted adoption of a Quota Management System (QMS).

This perception is echoed in a recently published article, but we take issue with the methodology and its conclusions. Claims that New Zealand’s QMS is an unmitigated success simply do not match the facts.

The fundamental idea behind the QMS is that fishers own (or lease) the right to catch a certain proportion (quota) of the Total Allowable Catch (TAC) of a certain species of fish. These quotas can be freely traded. Market forces are assumed to achieve economically optimal outcomes.

The TAC is set via an assessment process incorporating biological data and fisheries information, where available. The TAC is supposed to ensure sustainability.

New Zealand is committed to the most comprehensive QMS, more so than any other fishing nation. The system is a seductively straightforward solution to control commercial fishing effort.

Currently, TACs are set for more than 640 fish stocks, and represent around 620,000 tonnes of fish. But not all stocks undergo an empirical stock assessment.

Because proposals for downward change usually meet resistance from the fishing industry, changing a TAC requires a persuasive case. Most have not changed in response to either over catching or under catching (a consequence of budgetary constraints and political lobbying by powerful quota owners).

From a TAC, allowances are made for customary catch by Māori, recreational fishing and other mortality caused by fishing, for example through poaching. The remainder is the total allowable commercial catch (TACC), which is divided among the quota owners in the form of Annual Catch Entitlements (ACE).

When fishers do not have enough ACE to cover their catch, they must either buy more or pay a penalty to the government. Both quota and ACE can be bought, sold and leased. One of the unfortunate consequences of the QMS is that more money is made through trading ACE than actually catching the fish. Unsurprisingly, this empowers quota owners at the expense of fishers.

In our rebuttal to the original article, we point out that fish stocks are nowhere near as healthy as suggested. There is a lack of scientific data to correctly run the QMS. Three quarters of fish stocks have no formal or detailed assessment, and very few have independent research surveys.

Most assessments rely on industry self-reported catch and effort data, rather than independent surveys. This is a dangerous strategy, as shown by the collapse of the Canadian Newfoundland Cod stocks in 1992. At that time, fisheries managers chose to believe industry data showing increasing catch per unit effort, rather than scientific surveys suggesting precipitous decline.

Funding for stock assessments has significantly decreased; it is about 45 per cent of the levels in the early 1990s while the number of fish stocks in the QMS has increased 3.5-fold.

The broader environmental effects of commercial fishing on biodiversity, endangered species, seafloor habitats and the very ecosystem that supports the fish on which fisheries depend, are becoming increasingly obvious. Even so, little research targets these impacts. New Zealand’s QMS is a data hungry beast and it is starving.

As with all markets, not all behaviours that are incentivised are virtuous. There is money to be made or saved by dumping catches for which ACE is unavailable or too expensive, from poaching and falsifying catch returns. These behaviours have seriously distorted New Zealand’s catch data for decades. This includes massive dumping of unwanted catch and under-reported bycatch, including endangered dolphins and sealions.

Compounding this is the low level of onboard observer coverage (about 8.4 per cent in offshore fisheries and less than 1 per cent inshore) and the lack of effective enforcement. An independent review of New Zealand’s Ministry for Primary Industries (MPI) handling of illegal fish and dolphin dumping revealed industry capture of the regulator, involving flawed processes and inappropriate conduct.

A senior MPI manager admitted that:

… discarding is a systemic failure of the current system and something we have not been able to get on top of from day 1 of the QMS.

Thus, the QMS is not just starved of data: what little data it gets is highly questionable.

New Zealand’s fishers are firmly trapped in the cycle of non-reporting. The recent government decision to place electronic monitoring and CCTV cameras on every vessel indicates the gravity of the situation. This, however, does nothing to remove the perverse incentives inherent in the QMS itself.

The QMS has undermined jobs and livelihoods - just five large companies own over 80 per cent of quota, and 60 per cent of the offshore catch is taken by foreign charter vessels (FCVs) under contract to New Zealand fishing companies. These FCVs arrive with foreign crew, denying employment to New Zealanders, and outsource value added processing to Asia.

For decades FCVs, have been associated with the inhumane treatment of migrant fishers working in slave-like conditions. Despite new laws, abusive treatment has continued.

Concentration of quota in the hands of a few has resulted in many disenfranchised fishers. There is a sense of hopelessness over their activities and alienation from the management of the resource they depend on. Tellingly, Iceland, a nation strongly associated with fishing, described ITQs as feudal, quota holders as lords of the seas and fishermen as serfs.

Just last month, the Faroese Islands’ fishing industry overwhelmingly rejected a quota management system. They had too many questions and too little evidence to support adoption of a QMS.

Ultimately, we need to lower the QMS from its undeserved pedestal, acknowledge its limitations and move forward through open and honest debate. We should also look beyond our own shores for ideas, as New Zealand is not the only country wrestling with these problems.

There are lessons to be learned from New Zealand’s QMS, and they are not all good. After 30 years, New Zealand’s fisheries management needs a comprehensive review.