Chancellor steps down without regrets

John Ward, the University of Otago’s 18th Chancellor, will stand down on 31 December. He recently spoke to the Otago Bulletin Board about the honour and privilege of heading the governing body of New Zealand’s first university. 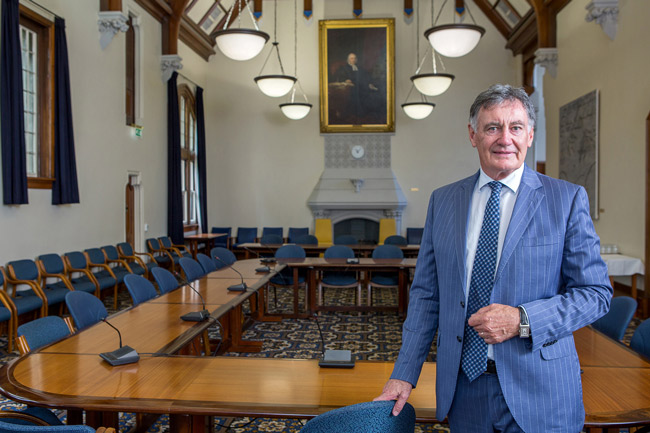 John Ward laughs as he describes the many people who tell him his picture is on their wall.

As Chancellor of the University of Otago for the past nine years he has capped more than 30,000 Otago graduands, and the classic photo of him placing their cap on their head and shaking their hand adorns walls, mantelpieces, bookshelves and tables across New Zealand and the world.

"To serve nine years in this role is an experience I never dreamt of, and for which I will be forever grateful."

He has served the maximum possible time on the Council – 15 years – and says it has been an honour and a privilege.

“To serve nine years in this role is an experience I never dreamt of, and for which I will be forever grateful.”

The first Chancellor from outside the Otago region, he has travelled from his home in Southland to fulfil his duties which, along with presiding over some 12 graduation ceremonies each year (103 in total), have included chairing the University Council and also the Finance and Budget Committee.

This week he chaired his last University Council meeting; this weekend he will shake the hand of his final graduand – Caitlin Wright, who will receive a Postgraduate Diploma in Medical Technology in Saturday’s 4pm ceremony.

He says graduations are one of the highlights of the role.

“Seeing the great joy in graduates and their families and friends. It is such special time. The University and its executive take particular pride when an individual is the first of their family to graduate. It sets the scene for other members of families to achieve at the tertiary level.”

So important are graduations to Mr Ward that he turned down an invitation to the Queen’s 90th Birthday party at Buckingham Palace, much to the chagrin of his wife Sue, because he would have missed a graduation ceremony.

"The University and its executive take particular pride when an individual is the first of their family to graduate."

Other highlights have included seeing the increasing number of Māori and Pacific students attending and achieving at Otago. Last year’s milestone graduation of 50 Māori doctors was a wonderful moment.

He has also overseen the University taking on its most ambitious capital development programme ever – which includes a new Dental School Clinical Services building, the upgraded Business School building, the new Chemistry Mellor Laboratories, the new Health Science Support building, and also a major landscaping project on the Dunedin campus.

As Chancellor, he was instrumental in championing the construction of Dunedin’s Forsyth Barr Stadium, rather than upgrading Carisbrook, and the University’s associated Unipol Gym, Plaza Café and Foundation Year building.

“It is a very attractive corner of our campus, and it’s very well received by students and visitors to the city.”

In addition, he is very proud of the University for signing Memorandums of Understanding with Iwi around New Zealand, particularly related to matters of healthcare.

And he says finishing this year – when Otago has topped all eight of the Government’s Educational Performance Indicators – means he is leaving on a high.

“It is very exciting, and a wonderful tribute to the Vice-Chancellor and other leaders.”

"They are all different but have had complementary strengths."

In his 15 years Mr Ward has worked with three Vice-Chancellors – Professors Graeme Fogelberg, Sir David Skegg and Harlene Hayne, and says each have been outstanding individuals.

“They are all different but have had complementary strengths. That has been a highlight from my perspective.”

He also pays tribute to all of his colleagues on the Council over the years, who he says have been wonderful to work with.

In 2016 the University Council underwent a Government-mandated constitution change, which reduced membership from 20 to 12.

"We still have the full spectrum of input and guidance ... It’s been business as usual."

The changes were brought about by the 2015 Education Amendment Act that established a new legal framework for governance in all New Zealand universities.

Mr Ward says that while there are fewer voices around the Council table, the impact of the change has been minimal from a functional perspective.

“We still have the full spectrum of input and guidance. We’re still represented by academic and general staff as well as students. It’s been business as usual.”

"Tides go in and tides go out in life. It is a wonderful opportunity for the next Chancellor to come through."

He is looking forward to spending more time with his two children and two grandchildren, and to travelling more with Sue.

He leaves with no regrets.

“Tides go in and tides go out in life. It is a wonderful opportunity for the next Chancellor to come through.”