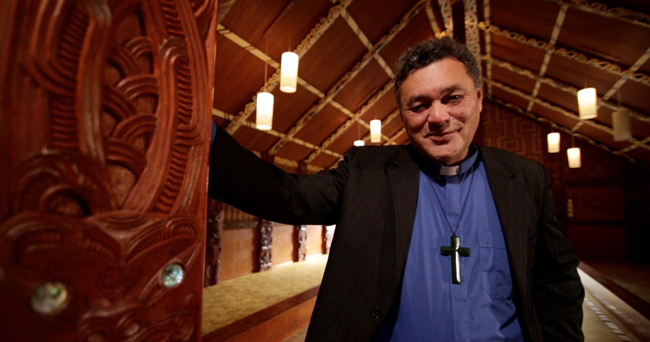 Reverend Wayne Te Kaawa’s newest adventure is a case of ask, and you shall receive.

The PhD student, who is of Tuwharetoa ki Kawerau, Ngāi Tuhoe and Ngāti Awa descent, is the University’s first Māori Chaplain.

While there have been a number of chaplains of Māori descent, Rev Te Kaawa is the first to take up the specialised Māori Chaplain position.

Rev Te Kaawa’s journey has gone full circle. He finished his undergraduate and post ministry training at the University in 2001, during which he spent six months with the University’s chaplaincy team.

"When I walked into the University, I thought about what footprint I wanted to leave that will benefit ultimately the University and the Māori community here."

He says the opportunity came up while rejoining the chaplaincy team in 2017 while starting his PhD.

“I told them, did you know there are no Māori tertiary chaplains in this country?

“It just so happened to be that they were discussing this as well. I did not get involved in that process, I just watched it organically come to life.”

Since finishing at the University in 2001, Rev Te Kaawa has worked in Te Teko, Auckland, Rotorua and Opotiki. He also became the leader of the Presbyterian Māori Synod, and worked with the Kingitanga Movement alongside King Tuheitia Paki.

The PhD student is also working on a paper that will be taught in the Department of Theology and Religion next year.

For now, however, he is working on his passion – helping students and staff with the spiritual aspect (taha wairua) of life on campus.

“When I walked into the University, I thought about what footprint I wanted to leave that will benefit ultimately the University and the Māori community here.

“When it comes to the chaplaincy and the lecturing work, I have achieved those two goals – now I just have to work on that PhD.”