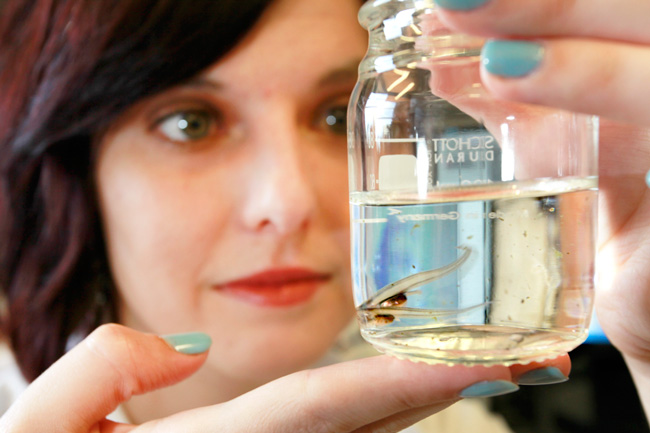 Amy Taylor, who is submitting her doctorate looking at how drugs influence the ability of tadpoles to regenerate their tails. Photo: Sharron Bennett.

Existing approved drugs have been shown to be able to turn on or off the ability of tadpoles to regenerate their tails in new research by an Otago Genetics doctoral candidate.

Amy Taylor, who is about to submit her PhD in Genetics, works on regeneration in tadpoles. Tadpoles can regenerate both their legs and their tails during most of the tadpole state – but only before they change into frogs. There is also a two-day period of a tadpole lifecycle during which no regeneration can occur; losing a tail during those two days is usually permanent.

Her research shows that treatment with an anti-cancer drug during this time resulted in regeneration. She also found that the presence of an anti-epileptic drug in the tadpoles’ environment could prevent the usual regeneration process for tadpoles.

“The change happens at a molecular level – genes that weren’t ‘turned on’, were, and that prevented regeneration happening as usual.”

Miss Taylor, formerly of Pretoria, in South Africa, works in the area of epigenetics – changes in gene expression caused by something other than the basic DNA sequence.

Tadpole tails contain spinal cords as well as other complex tissue; the discovery raises the possibility of potential spinal cord regeneration in the future.

The regeneration genes involved in the process are present in mammals as well, but not used after embryonic development. Miss Taylor now hopes to now move on to research using mammals, specifically mice, to see whether their genes can be affected the same way.

“There is a long way to go before we know whether this research has any bearing on human ability to regenerate, say, a finger, but we have the exact same genes as a tadpole uses for regeneration – ours are simply switched off.”

It is known that uncontrolled tissue growth leads to cancer, so in studying regeneration the key is trying to develop a method that is tightly controlled, allowing for safe regeneration.