A University of Otago student has gained a prestigious Woolf Fisher Scholarship for University of Cambridge doctoral study into the impact that changes in water availability caused by climate change will have on people’s livelihoods. 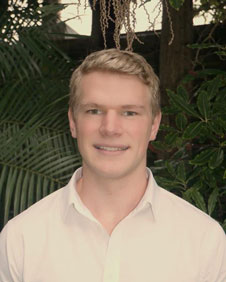 David Gawith, who graduated from Otago with a Master’s in Geography in August, will take up the four-year scholarship in October 2014. A Woolf Fisher Scholarship has an annual value of around $100,000, which includes full college and university fees, a living allowance and annual return airfares.

Awarded to up to three outstanding New Zealand graduate students each year, the Scholarship recognises outstanding academic ability and the other qualities which Sir Woolf Fisher most admired – integrity, leadership, boldness of vision and exceptional zeal, keenness and capacity for work.

Originally from Wellington, David attended Wellesley and Scots College and later came to the University to complete his first degree, a BSc (Hons) in Geography. He is currently working at Landcare Research in Auckland on a cost-benefit analysis of various climate change adaptation measures in Fiji.

His PhD at Cambridge will build on his honours dissertation and Master’s thesis. The former focused on climate change and hydrological modelling in Central Otago, and the latter on the social and economic vulnerability of Nepalese Himalayan communities to changes in water availability under climate change.

David says that such changes are seen as being among the most serious threats to human livelihoods under climate change.

“Despite the impact of projected changes in water availability on people’s livelihoods this subject is still poorly understood or quantified,” he says.

His approach to working out how to put a value on changes in water availability will be interdisciplinary and cover both social and economic perspectives. He will draw on hydro-climatology, human geography, development studies and economics.

His PhD will focus on five key interconnected themes: how is water availability likely to change under climate change; the economic value of these changes; communities’ ability to adapt; the cost of this; and whether the benefits of adaptation outweigh the costs of lost production under the status quo.

He intends to study at the Cambridge Centre for Climate Change Mitigation Research, which is based in the university’s Department of Land Economy.

Beyond his academic interests, David has also helped to raise public awareness, and engaged in international political processes, relating to climate change issues.

Last year he travelled to Antarctica as part of the 'Our Far South' public awareness project led by the Morgan Foundation, helping to film two documentaries on the trip. He has since given a number of presentations to school and university students about what he learned.

David was selected as part of the New Zealand Youth Delegation to the United Nations climate change conference (COP-18) held in Doha, Qatar, late last year. He delivered a speech on behalf of youth to one of the opening plenaries about the loss and damage caused by climate change. He also spoke about mountain perspectives on climate change, drawing on his research in Nepal, as part of the Youth Forum Side Event.

In the lead up to COP-18, he started a project called ‘Connected Voices’ that seeks to provide a platform for young people in developing countries to voice their point of view at the negotiations. The project managed to link young people in 83 otherwise unrepresented countries with attending delegates. By COP-21, to be held in 2015, he and his fellow Connected Voices steering committee members hope to ensure youth from every country and background in the world are able to have their voices heard.

David says that studying at Otago’s Department of Geography enabled him to combine the natural and social sciences with the aim of gaining a more holistic view of how climate change is likely to affect people.

“It’s also allowed me to visit some of the most spectacular parts of the country and the world,” he says.

David enjoys outdoor activities, such as tramping, climbing, mountain biking and skiing. He has also been learning how to paraglide and has gained his advanced solo license.

About The Woolf Fisher Scholarship

The other 2014 recipients were Alex Kendall and Jane Leung of the University of Auckland. Each recipient will commence a four-year research programme for their doctorates in October 2014.