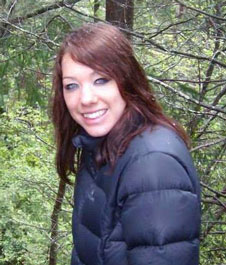 Despite growing up in the Mackenzie Country, miles from any ocean, Emily Frost has always wanted two things: to be a researcher, and to study the sea.

Emily has now almost completed her MSc in Zoology and Marine Science, studying the effect of carbon dioxide in the ocean by looking at the effect on sea urchins and sea stars, and was recently declared the Top International Graduate Scholar at an international conference on climate change.

“Ocean acidification is a relatively new area of study for climate change scientists, and there was a lot of interest in the area at the conference (the 5th International Conference on Climate Change: Impacts and Responses),” Emily says.

It is only in the past 10-15 years or so that the increase of carbon in the atmosphere has been recognised to have an effect on the oceans of the world, she explains.

“Due to their large volume and unparalleled ability to buffer C02 emitted into the atmosphere, the world’s oceans have absorbed almost half of all C02 in the past 200 years.”

The chemical process that allows that absorption has now been seen to lower the pH level of the ocean, making it less alkaline (a process referred to as ocean acidification).

Emily elected to study the effects of reduced pH seawater on sea urchins and sea stars due to their status as keystone species which help the eco-system function.

“If we get depleted populations of these species, it could have drastic effects on the wider ocean community.”

So Emily has been spending hours in the lab, looking at the effects of acidification on the embryos and larvae of the urchins and stars.

She started by looking at the development of the animals over time, and found that their size has decreased, probably due to their efforts going into survival in harder conditions rather than growing their size.

“We then put them into conditions that are predicted for the future and looked at what was likely to happen.”

“We did find that the same did apply, but not to the same extent in Antarctic species, which we think is because the ocean is colder for them, can uptake more carbon dioxide, and the pH levels as a result are already lower , so there is a chance they may have pre-adapted to acidic conditions.”

Having written a PhD-sized thesis for her Masters under the supervision of Dr Mark Lokman (Zoology) and Dr Miles Lamare (Marine Science), Emily plans to go on and do the higher degree in 2014.

“There is a lot of work still to be done in this area, and a lot of outreach to make the effect of climate change on this aspect of our oceans clearer to the world.”