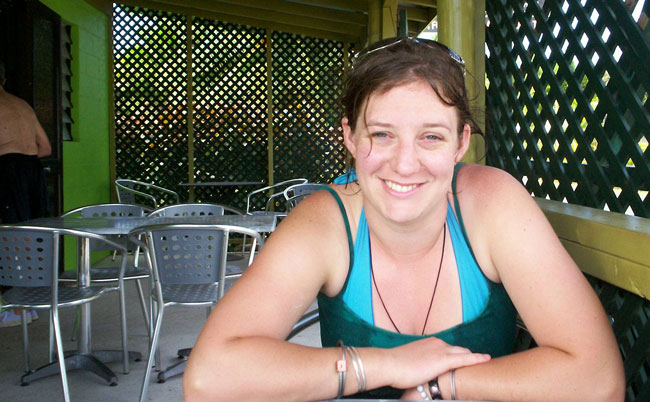 Affectionately known to her colleagues and friends as Izzy, Isobel completed her studies at Otago with a stellar academic record.

Her PhD, Synthesis of a Series of (-) – Quinic Acid-Derived Mimics of Phosphatidylinositol Mannosides, was completed last year.

Associate Professor David Larsen, her supervisor, recalls her as an “intelligent young woman who had a passion for the science she was researching. She was good at it.”

“I first remember Isobel when she was a second-year student. She would come to my 9.00 am Monday morning tutorials, put her head on the desk and promptly go to sleep. I’d wake her up after a while and ask her the question that the others in the group had problems with.

“To my surprise she’d rouse from her drowsy state and give me the correct answer. Clever girl; able to sleep and do chemistry at the same time.”

"In my view, her generosity and empathy for people were her finest and most endearing tributes."

She is recalled by David as a “good lab citizen.”

“In my view, her generosity and empathy for people were her finest and most endearing tributes.”

Close friend Kirsten Webster agrees, recalling ‘Izzy’ as a “vibrant, genuine young women who went out of her way to help anyone who needed it.”

“Living with the philosophy of 'paying it forward', she proofread countless theses and dissertations including my own – to which she gave me incredibly constructive comments even though it was an area outside her expertise.

“She was often seen around campus with a coffee cup in hand, talking to friends and colleagues. There will be many people (including myself) whose daily coffee will never be the same,” Kirsten says.

Unbeknownst to most of her colleagues and friends, Isobel suffered from depression. Her success at gaining a post-doctoral position at the prestigious University of Manchester should have signalled the start of a fine career in chemistry but Isobel died suddenly in January this year.

Her mother, Priscilla Cameron, says: “We underestimated the severity of Isobel’s illness. People suffering from depression will often hide their feelings, putting up a brave front. Behind the front, it becomes harder and harder to connect with others and problems can become seemingly insurmountable.”

“If you are beginning to feel overwhelmed or out of control, seek help. Do not be staunch alone.

“Isobel thrived in the community of the University of Otago. Her friends and colleagues were a powerful protective force. Her seven years in Dunedin were lived to the full. When you go out in the world put as much energy into taking care of yourself and creating a community around you as you put into your work. It is our connection to others that brings us life."

Where to get help