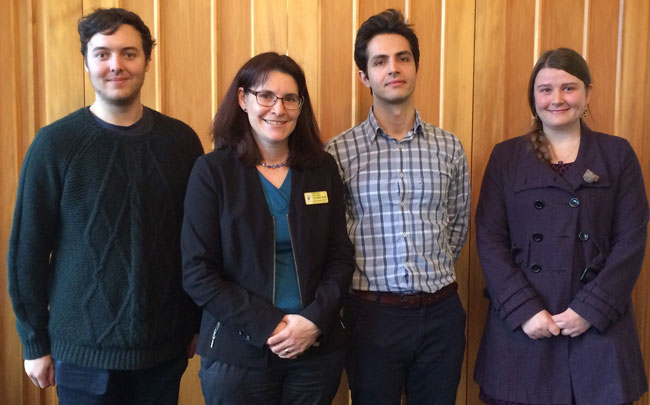 Some of the posters in the competition, being held in the Link.

A poster which outlined research into an intervention aimed at reducing Orientation Week drinking took the top prize in this year’s Postgraduate Research Poster Competition.

Held in conjunction with Postgraduate Open Day, the competition this year showcased the work of 30 postgraduate researchers across all four disciplines.

Benjamin Riordan won the competition with his poster outlining how intervention through texting students late at night during orientation with warnings on the effect of too much alcohol had a lasting effect on some, not only reducing their drinking during the week, but through the academic year.

His poster, “Calming the storm before the storm: A brief Orientation Week intervention to reduce academic year alcohol use”, won him $500 in book vouchers.
Two highly commended prizes were also awarded, of $100 of book vouchers each.

One was presented to Armin Sharandi, for his poster on his work in “Turning waste mussel shells to a bone substitute” called HA – through turning a waste product into a potentially useful commercial product.

The other highly commended award went to Anna Gosling, who looked at the “Colonisation process in Tokelau: insights from ancient and modern DNA”, in which she found DNA testing corroborates oral traditions in Tokelau which suggest the population has been replaced over time. Strands of DNA found in ancient remains were not present in modern day residents.

The head of the judging panel, Dean of the Graduate Research School Professor Rachel Spronken-Smith, said the calibre of the entries was extremely high and showed the depth and breadth of postgraduate study at Otago.

The posters will be in the Link for the rest of the week.

Postgraduate Open Day runs from 10am to 2pm on Tue 11 Aug. It has more than 50 booths from departments representing more than 70 areas of study. For students and staff considering postgraduate study, it provides an opportunity to research possible options.