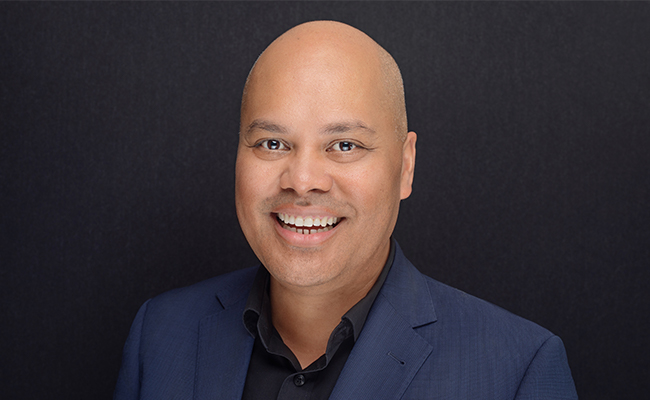 An Otago Doctor of Business Administration candidate is not only doing his degree by distance but also running one of the largest hotels in Papua New Guinea concurrently.

Robert O’Brien came to Otago’s Dunedin campus in 2020 to complete a Master of Business Administration, following a 20-year career spanning tourism marketing, international sales and the hospitality industry and is now completing his DBA while working as the General Manager of Airways Residences, Port Moresby, Papua New Guinea.

Born and raised in Samoa to mixed heritage parents, Robert spent much of his early childhood in Pago Pago (American Samoa) in a village with his grandparents, aunties and uncles.

His family emigrated to New Zealand in 1988 under the Pacific Access Category Visa. Robert says the move was his parents’ way of giving them better opportunities for a brighter future.

“I want my professional legacy to be about inspiring people, developing leaders and creating opportunities. And I also want to contribute to improving the lives of the people in developing nations.”

“At the time, I was 9 years old, which by Samoan standards, was relatively mature with well-formed thoughts and ideas of right and wrong. The challenge of arriving at a school where English was spoken, a language I knew very little of, hit hard in the first hour. The alienation of being a foreigner was felt, and the fear of failing became a hard reality.”

However, Robert found solace with a Samoan teacher who showed him kindness and encouraged him to read books in order to learn English quickly.

“It was these kinds of encouragements that put me on a trajectory of success in my school life, as well as a discovery of new future possibilities for my own life.”

He went on to attend Mt Roskill Grammar School, in Auckland and completed it to Bursary level. Then in 1999, he completed a National Certificate in Travel Careers and Training.

Robert’s career journey has taken him across many cities and countries around the world where his career successes became a culmination of hard work, flexibility, adaptability and mobility.

However, something felt missing and Robert decided he wanted to further explore his ambitions to inspire, develop leaders and create opportunities for others.

“For many years my career had been about becoming a great employee. Yet, despite achieving beyond my own professional expectations, there was always a part of me that never felt fulfilled. I knew that developing leaders and inspiring people were at the core of my successes. I also knew that effective communication and the creation of opportunities were key parts of the process. Yet, I felt stifled and stagnant in ways I could not understand.”

He began the Masters of Business Administration at Otago in 2020 and for the first time in years he felt a sense of excitement, one which only continues to grow as he embarks on his new adventure with the DBA.

“I want my professional legacy to be about inspiring people, developing leaders and creating opportunities. And I also want to contribute to improving the lives of the people in developing nations.

“My life goals have also become clearer. Creating generational wealth for my family is a priority. This includes creating business opportunities for my family, and building financial security for our future generations.”

Robert says his journey has been anything but normal since leaving Samoa. His role at Airways Residences marks the fourth time he has lived and worked in Papua New Guinea.

His hopes to continue his previous work, where he has focused on developing strong and successful local leaders.

Robert strongly believes in the creation of development opportunities and has always been an advocate of career coaching and succession planning.

“The negative reputation of the country currently dominates perception, and neglects to see the beautiful people and growth opportunities of this nation. People are always shocked at the size of the population (last census in 2018 shows 8.66 million people).

“And so, in time, I hope that my experiences of living and working there will contribute to enabling more Papua New Guineans to grow and take up more leadership roles within their country. I also hope that sharing more of the amazing stories of its people will shine a brighter light of the greatness that is to come from this developing nation.”