Underwater learning on the Yellow Submarine 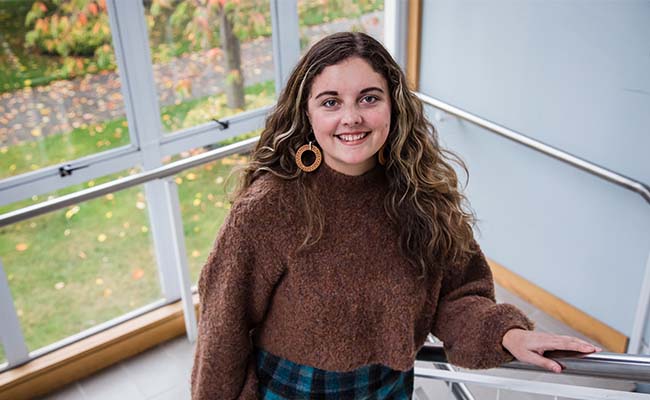 You’ve probably heard of Harold the Giraffe and the Life Education Bus, now an Otago student is hoping to introduce a whole new generation to the wonders of the ocean with the travelling Yellow Submarine Project.

Aimee Clark grew up by the beach in Napier and spent her time exploring the natural world, whether it was in real-life or on TV.

“My granddad was a big inspiration to me, we always used to go down to the beach and look in the rockpools.

“Somewhere around 8 or 9 years old I was sent a whole lot of David Attenborough documentaries in the mail from him – he lived in the UK. I just wouldn’t stop watching them – I loved them so much. One of them was the Blue Planet and I just became obsessed with the ocean.”

“We are currently living through a climate crisis which will have the greatest effect on younger generations, so helping children and young people understand the importance, fragility and beauty of the world's oceans through immersive environmental education will hopefully help them connect and want to protect these systems and environments over their entire lives.”

She was just 10 years old when she decided she wanted to become a marine biologist. After graduating high school, she headed to Victoria University to study a Bachelor of Science in Marine Biology and Environmental Studies.

“As I was going through that degree I had a lot of amazing opportunities that made me pivot. I wanted to do research when I first started but I discovered the importance of communication and environmental education. In order for action to happen people need to understand things, be passionate about them and have an empathetic connection. That’s kind of where I moved into science communication and activism.”

During her undergraduate degree Aimee had the opportunity to be a delegate with the Aotearoa Youth Leadership Institute at the United Nations Oceans Conference in New York in 2017.

Two years later she went to Oslo for the Ocean Youth Leadership Summit through the Sustainable Ocean Alliance, which is a global non-government organisation based in San Francisco.

These opportunities and her studies inspired her to explore how she could combine her love of science and activism. This brought her to Otago where she began her Postgraduate Diploma in Science Communication (Science and Natural History Filmmaking).

Since arriving at Otago earlier this year Aimee has decided to change to a Master of Applied Science in Science Communication, weaving her Yellow Submarine Project into the degree.

Still in its early phases, the Yellow Submarine Project was inspired by the Life Education Bus which travels New Zealand teaching children about health and wellbeing.

Similarly, Aimee wants to find a vehicle and transform it into an interactive laboratory classroom which simulates what it is like to go underwater in a submarine.

“We live in a country surrounded by water yet so many children and families don’t get to access and experience the beauty of the ocean world or learn about the amazing science that makes the ocean so important to the health of everything on earth.”

She hopes to create a narrative where children experience what it is like to go from the surface to the deep sea, learning about marine life and the different environmental issues plaguing the oceans and what can be done about them as they go, hopefully sparking a lifelong empathetic connection to the ocean in the process.

“We are currently living through a climate crisis which will have the greatest effect on younger generations, so helping children and young people understand the importance, fragility and beauty of the world's oceans through immersive environmental education will hopefully help them connect and want to protect these systems and environments over their entire lives.

“I want to make it a really empowering space for kids, especially from under-resourced schools. I think that having accessibility to environmental and science education is so important in sparking that curiosity and love from such a young age.”

In recognition of all the work she is doing to promote the importance of the oceans to the health of people and the planet Aimee was named in the YWCA’s Y25 wāhine toa for 2021.

“I feel very grateful and very humbled to be recognised alongside a list of women who have come from such diverse backgrounds and done such amazing things. Going to the launch event and getting to meet them all was so empowering because they were so passionate about what they’re into but also so giving to what you’re doing.”