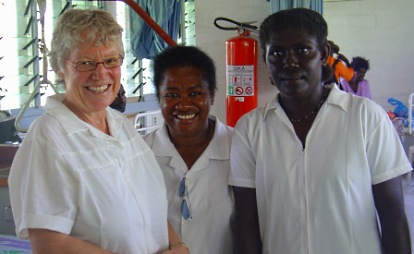 A volunteer midwife (left) with staff at Buka Hospital in the Autonomous Region of Bougainville (Papua New Guinea).

Primary Health Care and General Practice in Wellington is investigating the health risks for people who join Volunteer Service Abroad and the police and are deployed overseas.

Travel medicine specialist Dr Jenny Visser is leading the study which aims to improve guidelines and advice for these special volunteers when serving in Papua New Guinea, Bougainville, Vanuatu and the Solomon Islands.

“This is a special group of people going into areas where there’s a much higher risk of disease such as malaria or gastro problems, as well as serious accidents than in New Zealand, and there’s not a lot of good information about what can go wrong in the field,” explains Dr Visser.

“There are very few studies done prospectively, or while volunteers are actually in the field."

“This study will provide accurate rather than anecdotal data which can then be fed into our pre-assignment briefings. It will also assist in refining what goes into medical kits and emphasise the importance of compliance regarding anti-malaria medication.”

Malaria though is probably the greatest disease threat, and may be fatal as New Zealanders have no immunity and these areas are high risk malarial zones.

Dr Visser briefs all volunteers before they go on assignment in her other role as medical advisor to VSA and the police. She is asking 50 volunteers to keep a weekly online or hard copy diary of all illnesses and accidents they may experience during their time overseas.

“There are very few studies done prospectively, or while volunteers are actually in the field. Most are done after they come home and typically this can result in all kinds of bias, including memory loss,” she says.

Visser also says the study could well have an economic impact by preventing expensive evacuations to Australia from remote areas if volunteers get seriously ill or have bad accidents.

However she says that motor vehicle accidents are still the biggest risk in these countries, followed by malaria and gastroenteritis problems such as severe diarrhoea, giardia and other parasites.