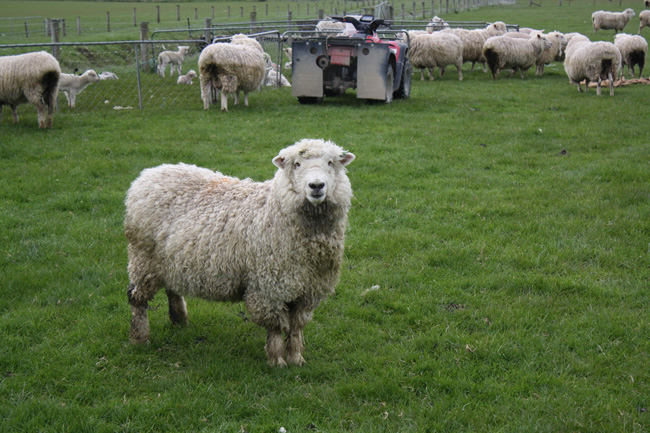 Otago research shows banned pesticides (or their toxic degradation products) remain in the sediments of farm streams years many on.

An Otago study shows that the tell-tale legacy in rural South Island areas of pesticides banned many years ago remains, regardless of the type of sheep and beef farming now taking place on the land.

The research, led by Department of Chemistry recent PhD graduate Dr Pourya Shahpoury and just published in the international journal Environmental Pollution, nevertheless shows that average pesticide levels found in sediments of streams running through the 15 South Island farms assessed as part of the study were still within recommended thresholds.

The most frequently detected pesticide (chlorpyrifos) found in the stream beds is one that is approved in New Zealand for current use against pests. However, the study also found chemicals (or their toxic degradation products) present that had been widely used many years ago before they were banned.

The team of Otago Chemistry and Zoology Department researchers compared the presence of chlorinated pesticides at streams running through five sheep and beef farm clusters located near Amberley, Akaroa, Outram, Owaka and Gore.

In each of the five areas, one property was farmed organically, a second was farmed using the integrated pest management (reduced pesticide use) farming method, and a third was farmed conventionally. The farms were carefully selected with the help of a design formulated by Otago’s Agricultural Research Group on Sustainability (ARGOS), which studies farm management strategies in New Zealand.

Sediment samples were taken from the 15 different farmland streams during the spring/early summer, the period when pests and weeds are most active, resulting in more intense application of pesticides compared to winter or autumn.

Dr Shahpoury says chlorinated pesticides, within recommended thresholds, were found throughout the study areas regardless of the farming practices that took place on the farms eight to11 years preceding the study.

“Although the chemical chlorpyrifos was the most frequently detected in stream sediments, in contrast to our expectations, its concentrations were not highest in stream sediments from conventional farms and were found at similar levels across all three different farm types. This may have been due, at least in part, to its high potential to undergo vapour drift and re-distribution,” he says.

"While pesticide concentrations averaged across farm management types were below toxicity thresholds, up to 23 percent of the individual sediment samples contained concentrations above the toxicity thresholds. The presence of these toxic hotspots, although not common, may be partly responsible for the deterioration of macroinvertebrate communities in streams on conventional farms reported in an earlier Otago study.”

Chlorinated pesticides have aroused global concern due to their long persistence in the environment, impact on non-target organisms, and bio-accumulation in the tissue of animals and humans via the food chain.

Until the 1970s, chlorinated pesticides were the most widely used pesticides in the world, and were mainly used in agriculture. In the past 30 years the use of pesticides like DDT, endosulfan, and dieldrin in agriculture has been banned in favour of more efficient and less toxic varieties.

The researchers found that the mean concentrations of some of the investigated chemicals- namely endosulfan and dieldrin - were highest in sediments from conventional farms.

"We believe that the higher concentrations in conventional farm sediments occurred as a result of increased pesticide runoff at those farms," Dr Shahpoury says.

He adds that his study shows that vapour drift from conventional or integrated farms might be an issue when it comes to the spread of pesticides to areas where they were not directly applied.

"We can minimise the environmental impact of farming by going towards organic farming, but our study confirms that we can't eliminate the presence of pesticide residues from the environment - at least not for now."