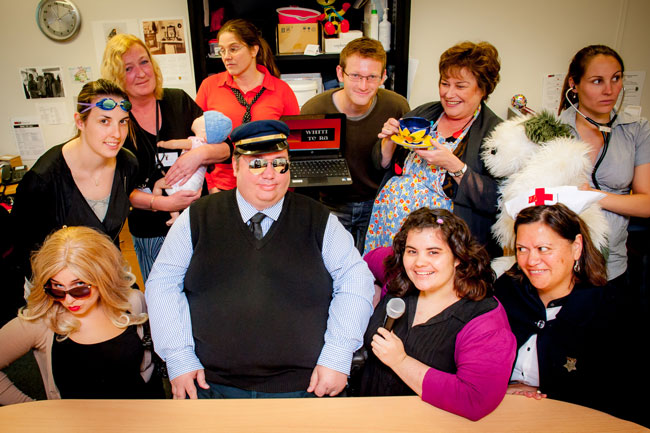 Dr Tristram Ingham (front row, with aviator sunglasses) and his team of research assistants take a light-hearted approach to coping with the heartbreaking seriousness of their research project.

For University of Otago Wellington’s Dr Tristram Ingham and his team of research assistants working to understand the causes of acute respiratory infection in childhood, camaraderie and a sense of fun have helped them deal with the heartbreaking seriousness of the study.

Acute respiratory infections (ARIs) are a major source of child morbidity and the most frequent reason for children to be seen by a doctor – accounting for half of all GP consultations. Furthermore, hospitalisation from ARIs in New Zealand is significantly higher than many other developed countries, and increasing. In addition, Māori and Pacific Island children are almost three times more like to end up in hospital, even after adjusting for known risk factors.

Dr Ingham and his team have been working hard over three consecutive winters since 2010 gathering data for a case-control study aiming to identify the risks for ARI and for disease severity. He says one of the biggest challenges of the study has been that it is community based, and involves approaching anxious parents with sick babies and toddlers. But his team have done it, and with 1000 children now part of the study – their aim being to get 1050 - they’re on the home stretch. Housing is of course a massive issue, and the team also undertook a separate add-on study that has seen them complete 620 “Well House” checks.

Dr Ingham has no doubt that the success of the project to date has hinged on his team’s ability to work together, and their incredible diversity of backgrounds.

“The work that they have been able to do in terms of recruiting and being out there in five different clinics and two hospital wards has been fantastic. Logistically it has been an enormous challenge - and an enormous success in the sense that the team work so well together and have such amazing people skills – something they really have in common amidst their diversity.”

He notes the serious, often life threatening and fairly depressing nature of ARIs: “Often the team have had to take babies to hospital or make the call between calling an ambulance or sending them to their family GP. Those are difficult calls for anyone, and there are some real heart strings moments in the community.”

But pulling together and maintaining a sense of crazy fun keeps their mood light and has helped them get through, he says.

For example the team has held regular celebrations of milestones (such as completing 100 cases) , which incorporated team debriefing sessions. These sessions included light-hearted activities such as quizzes about the most difficult or unusual questionnaire responses and role plays of some of the most challenging or hilarious moments, Dr Ingham says.

“Moments like when things didn’t go to plan with our wee participants and their parents - our bloopers. We also had merit awards for such things as ‘person who made the least number of babies cry whilst having a blood test’.”

The team are now focused on the final stages of the project, with a view to having preliminary results available early in 2014.