More work needed to get kids connecting with nature 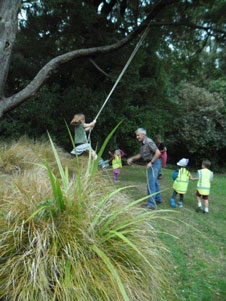 Otago research has examined the opportunities available for New Zealand children to connect with nature.

Interdisciplinary research involving University of Otago geographers and zoologists has highlighted the great biodiversity of New Zealand neighbourhoods and the opportunities they provide city-dwelling children, but it has also pinpointed hindrances they face in connecting with nature in their neighbourhood.

The 'Natural Neighbourhoods for City Children' study, supported by the Marsden Fund, was headed by Associate Professor Claire Freeman (Geography) and Associate Professor Yolanda van Heezik (Zoology). They examined how 187 children (aged nine to 11), in Auckland, Dunedin and Wellington connected with nature around their home and neighbourhood.

"There is a general belief that children who live in cities are becoming divorced from nature, so we wanted to test that and how it relates to New Zealand," Associate Professor Freeman says.

"We couldn't have done the study without the social science and biological science disciplines working together."

The social science component included one-to-one sessions where children drew a map of their neighbourhood and the places they see as natural, and then talked about where they play, and what they do and don't like about their neighbourhood.

This was where some of the cross-over in disciplines came in. Associate Professor van Heezik says they used an aerial map-GIS interface so the children could show the places they go.

"As a society we need to reconsider the right of children to be out and about and encountering the biodiversity that is there."

Even children with large home ranges did not go to the most biodiverse places and many had no experience of using local bush, parks, beaches or rivers even though these were within easy access of their homes.

Associate Professor Freeman says the study compared socio-economic groups and found all could access a range of public biodiverse environments but many children weren't using them because of societal constraints.

"But does it mean children are not connected with nature? We found they are still accessing nature where they can – in their garden, on the street, or in the school playground."

"We need to focus our biodiversity initiatives closer to home, in places where children can go,” Associate Professor Freeman says.

"As a society we need to reconsider the right of children to be out and about and encountering the biodiversity that is there."