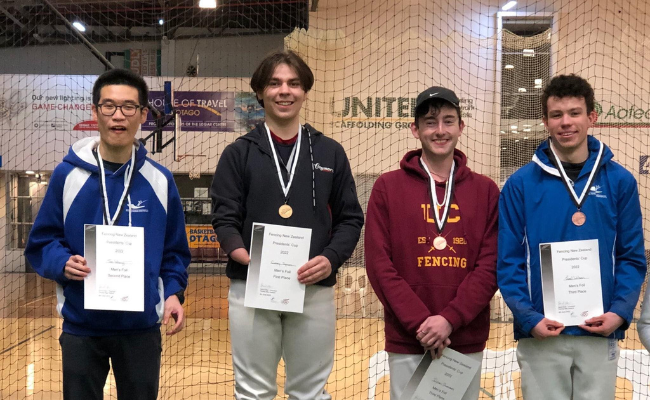 Nominated for a Blues award recognising his achievements in fencing is a medical student with one busy schedule.

Third-year student Corey Symon has experienced his fair share of challenges including COVID-19 disruptions but none of them have stopped him from working hard on his study and sporting goals.

Being born with one hand has not been an obstacle for Corey.

In fact he laughs as reflects on the fact fencing only requires one hand.

“My mum was a fencer and she got me and my brother into it when we were younger too.”

Before the pandemic, the 20-year-old went to Sydney to represent New Zealand in the National Under17s Tournament.

“I also have the National Under20s coming up later this year and the Oceanic Seniors in mid-October.”

These he does on top of what is not an easy course of study. With three years left to go on his undergraduate studies there is still plenty left to learn.

“I like the social aspect of study. Being in a tight-knit med-school class, you get to know each other pretty well. I quite like that side of it.”

One of the biggest challenges has been on-line learning.

“That was probably the hardest part of my study so far. Starting the year with Neuro and not being able to see the physical side of your study is tricky to navigate.”

As well as studying and fencing, Corey has been co-directing Med Revue 2022 and is Vice President Administrative of the Otago University Medical School Association.

“It’s important you make time to do those things you enjoy while you’re studying and find the balance. It’s nice to have extra-curriculars so you’re not solely focussed on academics.”

Despite the trickiness of navigating study online, the Napier-born student is half-way through his study and excited to see where his future goes.

He’s keeping an open mind as to where Medical School might take him and has plans to continue fencing along the way.