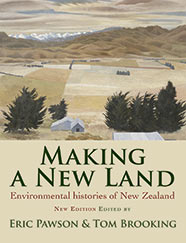 Making a New Land presents an interdisciplinary perspective on one of the most rapid and extensive transformations in human history: that which followed Māori and then European colonisation of New Zealand’s temperate islands. This is a new edition of Environmental Histories of New Zealand, first published in 2002, brimming with new content and fresh insights into the causes and nature of this transformation, and the new landscapes and places that it produced.

Unusually among environmental histories, this book provides a well-illustrated and comprehensive analysis of change, focusing on international as well as local contexts. Its 19 chapters are organised in five broadly chronological parts: Encounters, Colonising, Wild Places, Modernising and Contemporary Perspectives. These are framed by an editorial introduction and a reflective epilogue. 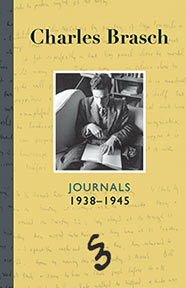 Transcribed by Margaret Scott, with a dramatis personae and annotations by Andrew Parsloe, these are the journals of an intelligent young man, just 30 when they begin, living through World War II in Britain.

In entries that quickly become a daily habit/ necessity, Brasch struggles with relationships, what part he can play in the war effort, what he should do with his life, whether he should return to New Zealand … and creates a moving and always interesting document. Hundreds of people – especially emerging writers and artists, both British and Kiwi – appear in these pages.

Cultural historian Rachel Barrowman’s introductory essay, Finding ‘a Home for the Spirit’, discusses the journals as an exploration of “identity and self … during the restless war years”. This diary gives a close-up view of the self-defining years of a young man whose quiet presence continues to radiate through New Zealand’s literary and art scene. 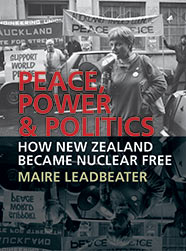 This is a story of how ordinary people created a movement that changed New Zealand’s foreign policy and our identity as a nation.

The story of peace activism from our pre-recorded history to 1975 was told in Peace People: A History of Peace Activities in New Zealand (1992) by Elsie Locke. In this new book her daughter, Maire Leadbeater, takes the story up to the 1990s in an account of the dramatic stories of the colourful and courageous activist campaigns that led the New Zealand Government to enact nuclear-free legislation in 1987.

Politicians took the credit, but they were responding to a powerful groundswell of public opinion.

A History of State of Origin, by Will Evans, Slattery Media Group (Melbourne), October 2013.

International Law as the Law of Collectives: Towards a Law of People, by John R. Morss, Ashgate Publishing, 2013.

The Contested Terrain of the New Zealand All Blacks: Rugby, Commerce, and Cultural Politics in the Age of Globalization, by Jay Scherer and Steven Jackson, Peter Lang Publishers (Oxford), 2013.

Creative Perfektion: The Why and How of Creative Thinking, by M. Kilgour and E. C. de Run, Penerbit UNIMAS (Malaysia), 2013.

Peace in Action: Practices, Perspectives and Policies that Make a Difference, edited by Raymond King, Victor MacGill and Roger Wescombe, 2013.

If you have recently published a book, please email the Magazine editor.