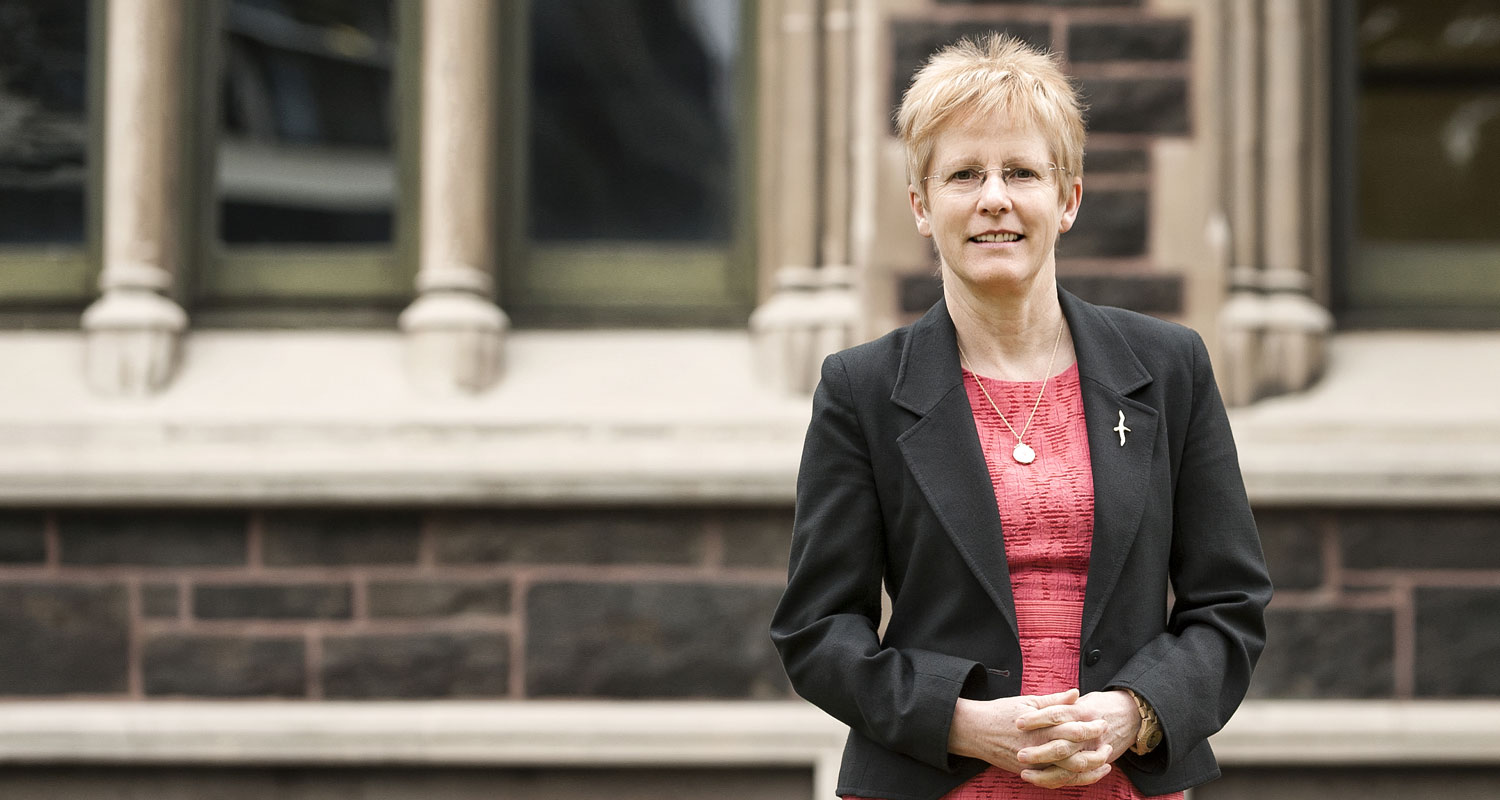 Change has been the hallmark of Professor Helen Nicholson’s career. Now she is taking on the latest in a long list of challenges as Otago’s inaugural Deputy Vice-Chancellor (External Engagement).

How did someone who studied medicine at Bristol University and began clinical work and research in urology end up as Deputy Vice-Chancellor (External Engagement) at a university on the other side of the world?

It is a natural question to ask and one you suspect Professor Helen Nicholson has asked herself. But, as she recounts the twists and turns of the path she has taken, you soon realise you are talking to someone who relishes new challenges.

After graduating at Bristol her surgical training took her into the field of urology and, eventually, to research into the hormone oxytocin and its role in male reproduction.

"It wasn't a particularly easy decision to leave clinical medicine, but I did and went back and did an MD."

Family commitments followed, but when her youngest child was about to start school she applied for a lectureship in anatomy which allowed her to pursue both teaching and research.

A sabbatical in New Zealand, while doing research on the effect of oxytocin on sperm transport in sheep, enabled Nicholson to make contact with Professor Gareth Jones in Otago's Department of Anatomy. Two years later, in 2000, she was appointed to the role of Professor of Anatomy at Otago, thus completing the move to the other side of the world.

But more change was to come. In 2003 Nicholson took over as Head of Department and then became Dean of the Otago School of Medical Sciences in 2007, revelling in the challenges of an expanded leadership role.

"I enjoyed the problem solving and the strategy side, and I also enjoyed the people – which I guess is why I went into medicine in the first place. Those roles do involve the need to understand people and getting them to work well together.”

Understanding people is vital, she explains.

"We are all different and work in slightly different ways. Understanding how you can develop people so they can be the best they can is what's important to me. It is about developing people’s strengths, rather than dwelling on their weaknesses.”

Involvement in the making of the documentary Donated to Science in 2009 took Nicholson's interest in medical education down another interesting path.

"That opened for me a whole new area of research. We've carried on filming those students, who are now registrars, looking at a whole variety of issues around not only dealing with death, but developing professional identity and what determines which careers you go into.”

Yet another change of direction followed in 2014, tackling the role of Pro-Vice-Chancellor International in 2014 which brought its own unique challenges.

"I think internally the International Office had been quite silent and my challenge was to get the wider University involved. If you're wanting to develop new products for the University and you are wanting academics to understand why it is important to have international students, you actually need to work with the academic divisions.

In June 2015 the new Division of External Engagement was created. As the title suggests, her role has now broadened into external engagement, recognising the areas of potential overlap and synergy between what International was doing and other parts of the University.

The new division comprises Marketing and Communications, International, and Development and Alumni Relations: Nicholson says there is growing literature which suggests these areas should work much more closely together.

"It just seemed to make sense because when you have three areas with similar aims reporting to different members of the senior management team, trying to make things happen in a timely manner can be difficult."

Nicholson says the change is occurring at a time when domestic student numbers are flat and when government wants to double the income from international students by 2025.

"Government drivers are also to increase domestic student mobility and international postgraduate students. There is pressure from government, but when you've got flat domestic enrolments you have to increase your roll with good students from elsewhere. We're trying to develop a more effective team to do that."

There is also the ever-increasing focus on international rankings and University profile to contend with.

Nicholson has been tasked to raise the profile of the University nationally and internationally, to increase engagement with key stakeholders, here and overseas.

"This also involves working with the academic divisions because they need to understand what we're trying to do and why. The whole area of engagement just can't be the centre engaging – it needs to be the wider University population.

"The aim next is to build on those relationships and develop them into much stronger ones rather than just going out cold to wherever we want to go. With more data around where our staff are engaging nationally and internationally, we can use this information strategically."

There is a need, she says, to harness existing activity and co-ordinate it so that “we can work smarter” and more effectively.

The “here” part ranges from local schools to government as well as working with Māori and Pacific and then increasing enrolment numbers, both national and international, with good students.

Also within the new division is the Schools’ Liaison team who visit schools across New Zealand explaining the opportunities that exist at Otago and working one-on-one with high-school students to assist their career decisions.

This year the scholarship programme has been expanded to attract the brightest and the best to the University and Schools’ Liaison plays an important role in raising awareness of these scholarships.

Nicholson is also aware of Otago's role in its own international neighbourhood, the Pacific, by engaging with their governments, their universities and their ministries of health to facilitate and provide research and evaluation.

"We want to recruit students here who will hopefully return to their communities. We don't want to remove all the good people from the Pacific Islands. We want to help them so that they can go back home and make a difference."