For New Zealand artists, a year of financial support and studio space to solely focus on their artwork is invaluable for their development. But it’s what they give back to New Zealand’s artistic scene that shows the legacy of the University of Otago’s Frances Hodgkins Fellowship. 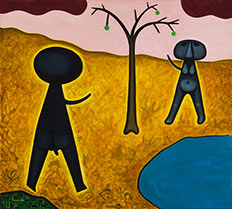 “This present line of work is good,” Dunedin-born artist Frances Hodgkins writes in a letter to British gallery owner Lucy Wertheim from Flatford Mill, in 1930. “I have got well into the spirit of the place and it is yielding up riches – undreamed of, at first sight.”

It’s a game changer in the life of an artist. The combination of financial support with an inspiring new environment in which to work is what most artists only dream of. But these lines written by Hodgkins describing the prolific creative period brought on by her experience at the painting retreat was an opportunity replicated by the founders of the Frances Hodgkins Fellowship years later. Fifty years – and 49 fellows on – the fellowship continues to thrive.

Widely thought to be the brainchild of Dunedin writer and publisher Charles Brash who believed that a visual residency would help foster the country’s cultural identity, the fellowship was established at the University of Otago in 1962, with a group of anonymous philanthropists helping to fund it. With the Burns Fellowship set up several years before, and the Mozart Fellowship (for musicians) following a few years later, the University of Otago became a centre of artistic endeavour. 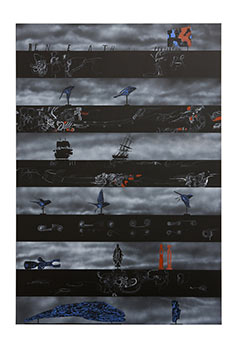 Created to “encourage artists in the practice and advancement of their art” by providing them with a studio and a year’s stipend, at the time the fellowship was created it was the only artist’s residency of any substance in New Zealand – and remains the most generous fellowship for New Zealand artists today.

Applicants are selected based on their track record, commitment to their work, and their ability to demonstrate how the residency will provide opportunities to build a sustained substantial practice and forge positive directions in their work. Candidates usually provide a proposed project outline, but, given the potentials for creative invention, selectors take into account that the project may grow and change through the year of the appointment.

To date, 49 artists have benefited from the residency, which began with painter Michael Illingworth – known for his distinctive landscapes and figurative works – awarded the first fellowship in 1966. Other well-known artists awarded the residency include Ralph Hotere, Julia Morison, Fiona Pardington, Joanna Paul, Christine Webster, Shane Cotton, Grahame Sydney, Marilynn Webb, Michael Smither and Gretchen Albrecht. Around 20 to 30 New Zealand artists from a variety of media apply each year for the highly-sought-after prize, which also has the positive effect of establishing Dunedin as a centre of art and innovation. 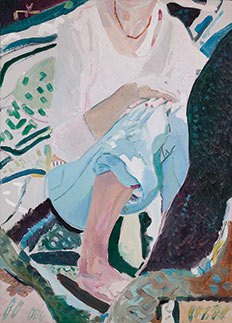 It included a work of art by each fellow created during the fellowship alongside a more recent artwork, highlighting a rich diversity of artists and art practices supported by the residency including painting, sculpture, printmaking, photography and digital media. The two works side-by-side also showed the journey and growth of the artist. A book on the same subject – co-written with Andrea Hotere (the daughter of past fellow Ralph Hotere) – will be released later this year.

Pitts says the value of the fellowship can be measured not only in what the artists bring to the city, but also in what they contribute in the following years to the national art scene.

“Bringing people into Dunedin enlivens the art scene here in the city, inspiring new artists and engaging more people in art and design in general.

“But the overall success of the fellowship can be measured in what those artists go on to achieve and contribute to New Zealand’s art culture. Out of the 49 artists given an opportunity to make work here, three have died, two are not making work any more, but the rest are still working and contributing to our national art scene.”

However, the fellowship has not been without its challenges, says Pitts.

“When the fellowship was initially set up, it was aimed at bringing the visual arts into the University of Otago, but, as the University did not have an art school, it was not really aware of the impact of having an artist in its midst.

“In the early days, they didn't realise how artists work – and how noisy and messy they can be. The first studio space was very cold initially and many artists complained, particularly when faced with a Dunedin winter. Sculptor Marte Szirmay – who had the residency in 1971 and 1972 – talks about her wax moulds being chewed by rats, which she obviously wasn’t too happy about.

“It was a steep learning curve in the beginning and it was difficult securing the funding, but they persevered and the fellowship now thrives.”
Frances Hodgkins Fellowship selection committee convenor David Bell says much of that success is due to the ongoing support of the University and city.

“Making decisions between so many deserving and highly committed candidates is never easy. The outcomes have all been successful, however. The fellowship has enjoyed the positive support of the University and city communities – and this wide support has ensured the success of each residency.

“Without exception, the fellows have brought a new sense of inventive vision to our communities. They enrich our different worlds. They have responded positively to the opportunities to work industriously, to take risks in their work, to build new professional relationships and to re-invigorate their conceptual frameworks and their practices. Fellows give public talks, exhibitions, student sessions and have contributed to the rich collections of the Hocken.”

Bell says not only does the residency allow artists dedicated time to work without financial pressures, this time also offers creative flexibility, where many artists explore new mediums. 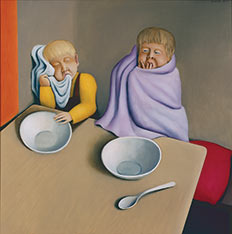 “For many artists, the opportunity for a full-year residency, on a substantial salary, and with a dedicated studio and institutional support, offers potentials both for an immersion in their work and for risk-taking explorations they would struggle to experience while balancing their art work against the demands of part-time jobs.”

For Bell, the achievements of the first 50 years of the fellowship extend well beyond the original brief to “encourage artists in the practice and advancement of their art”. It has been the “game changer” for 49 artists, giving each an opportunity to expand professionally and personally. It has contributed enormously to New Zealand’s artistic voice – and the impression of New Zealand art to the world. But moreover, says Bell, it has contributed to “the legitimisation of the visual arts as a realistic professional pathway, rather than a privileged pursuit”.

Says Bell: “The fellowship has been – and remains – the most prestigious residential award in visual arts practice in New Zealand and, beyond its enrichment of our own local arts scene and the refreshing cycles of change through each year’s appointments, the cumulative effect of the residency has been to secure the careers of two generations of professional artists in this country.”