From small beginnings more than 50 years ago, the TOXINZ database now provides easily referenced information on more than 200,000 poisonous materials, and is gaining uptake around the world.

TOXINZ, a massive database of information on poisonous chemicals, pharmaceuticals, plants and animals, developed at the University of Otago, is now being used internationally in Australasia, Europe, Asia, Africa, North and South America.

Started more than 50 years ago as a paper-based system for the University of Otago-based National Poisons Centre, TOXINZ has developed into an online database of nearly 200,000 documents, all overseen by an international editorial board.

National Poisons Centre service delivery manager Lucy Shieffelbien says that, while the core objective is to provide 24/7 emergency information to clinicians and the public, updating the database is also a constant process.

"Everything is medically reviewed to ensure the current ‘gold-standard’ approach to treatment is met. Our international editorial board comprises eight or nine editorial staff. We’ve got somebody in the Czech Republic, we've got somebody in Thailand, Australia – we've got international representation to give good governance across a range of toxins."

When a new drug is released, National Poisons Centre staff write a document for the database. It is peer- and medically-reviewed internally several times, then sent to the editorial board for final review before being uploaded to TOXINZ.

"For example, if we have someone who specialises in paediatric toxicology, we might get them to check the paediatric supportive care section of the document to give it the thumbs up or rewrite it."

Over time, the database transitioned from paper to a computer-based system, with regular updates provided to hospitals around the country using CD-ROMs. However, it was the advent of the world wide web that opened up the potential for commercialisation – which is where the University’s commercialisation company Otago Innovation Ltd became involved.

In 2008, Otago Innovation investigated the possibility of taking the database to market, initially focusing on Australia with uptake by all states.

Otago Innovation commercialisation manager Dr Tracey Smith says TOXINZ is now used in more than 30 countries – and that's not including developing countries with free access through the WHO Hinari programme , something regarded as an important social responsibility. Access has also been granted to Medicine Sans Frontier (MSF or Doctors Without Borders). 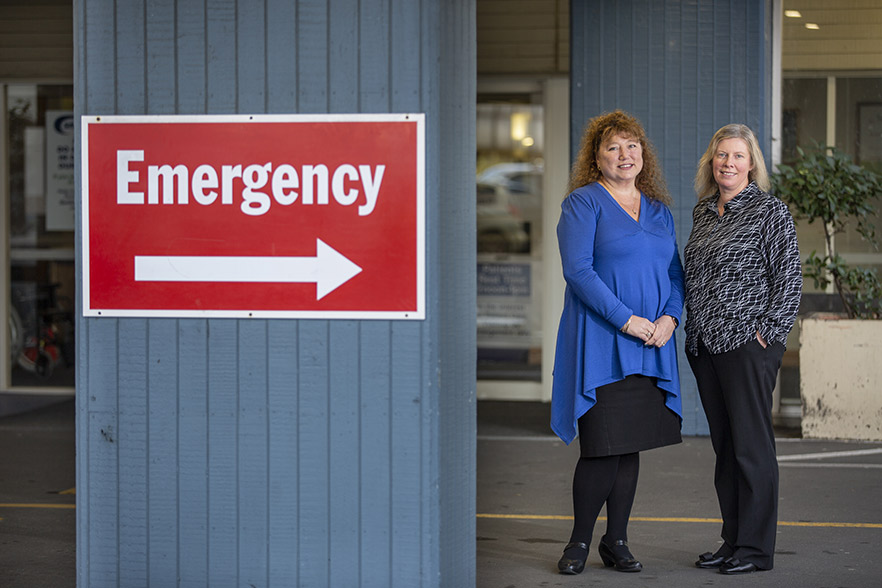 Dr Tracey Smith and Lucy Shieffelbien: "Everything is medically reviewed to ensure the ‘gold-standard’ approach to treatment is met.”
Photo: Graham Warman

"After a personal meeting with the Kazakhstan Minister of Health and his team of toxicologists, Kazakhstan came on board as a customer at ministry of health level. They're one customer, but that's for access across six different centres around Kazakhstan," Smith says.

"We've generated a lot of interest in the Asian market, including Malaysia, and the Philippines is about to join. Rather than dealing with individual institutions and hospitals we've had a lot of buy-in at government and ministry of health level. A country will recognise TOXINZ as a valuable resource and, rather than negotiating prices with 10 different hospitals, they will buy TOXINZ for them all."

One of the challenges is to identify a champion and key decision-maker within those organisations who can help through the procurement process, Smith says. These relationships are usually formed by having a presence at international toxicology meetings: face-to-face discussions allow for a better understanding of how TOXINZ would suit a customer’s needs.

"Typically you have clinicians who use TOXINZ and absolutely love it – particularly if they've used it through a free trial at an international meeting or an organisation like MSF," Shieffelbien says. "When they go back to their home institutions they want it and are knocking on their administrator’s door asking them to buy it."

TOXINZ also has a presence in the United Arab Emirates and has been supporting toxicology efforts in the MENA (Middle East and North Africa) regions. With a number of new poisons centres being established in the region, TOXINZ is a new and alternative resource available to them.

"There have been several enhancements in the last few years to keep up with technology. We've optimised TOXINZ for iPads, tablets and smartphones. You see exactly the same information, with much the same look and feel, but it is optimised for a smaller screen."

Although frequently asked “is there an app for that?” Smith says the answer is “no”. It makes far more sense to update a database, which is then optimised for use on mobile devices, than to have to update an app.

Other enhancements include the ability to search for chemicals without the need to correctly spell long and often complex chemical names. This coding system allows users to search and bring up the same document regardless of which continent the customer is in.

Even common misspellings of drug names are recognised as synonyms, meaning the correct substance and information can be located. They can also be searched phonetically and by key words.

Shieffelbien says failed searches are monitored so they can work out why. "Is it because of spelling or, of the 200,000 documents on there, is it the one we don't have? We can also take the top 100 most often accessed documents – which accounts for approximately 80 per cent of all searches – and ensure they are always up to date.

"It also tells us if, in the last 24 hours, there have been a lot of searches for a particular substance. Finding out why gives us important intelligence."

This toxicovigilance is vital and helps identify issues, any emerging trends or potential risks such as the ever-changing world of psychoactive drugs.

"The enhancements have been made quite deliberately to give us competitive advantage and make TOXINZ better or different from other databases," Smith explains.

"We've tried to be conscious of what other products are already out there and how we can make TOXINZ easy to use, so that people like it and that it's a credible product."

There are two main competitors: one in the US and another in the UK.

Smith and Shieffelbien are quietly confident about the future for TOXINZ. One of their resellers has a sales force of 350 worldwide which gives them global reach.

They currently manage all customer relationships themselves, but are getting closer to the point where they will be able to grow the team to have dedicated staff to help with this.

Anyone accessing the database can simply go to the TOXINZ homepage – toxinz.com – and enter the name of the substance they want information on.

There is a summary with links to fuller information covering things such as intervention criteria, the need for hospitalisation and further investigations.

There are quick links to criteria to assess severity and correct treatment, through to the use of antidotes and monitoring. It even covers discharge criteria.

Information is evidence based and fully referenced, with links (where applicable) back to the source document on Pub Med.

Paracetamol is the most searched for substance globally.

"If you think about it, pretty much every house has it. Particularly the liquid: children get into it and when the doctor prescribes it for a child you usually get a great big bottle of it," says Shieffelbien.

"Liquid paracetamol is one of 12 pharmaceuticals in New Zealand which, by law, must have a child-resistant closure. It's good, but it lulls parents into a false sense of security. It's not child proof – it's child resistant!"

The hope is it will slow the child down long enough for the parent or caregiver to realise there is something going on.

Welcome to the jungle