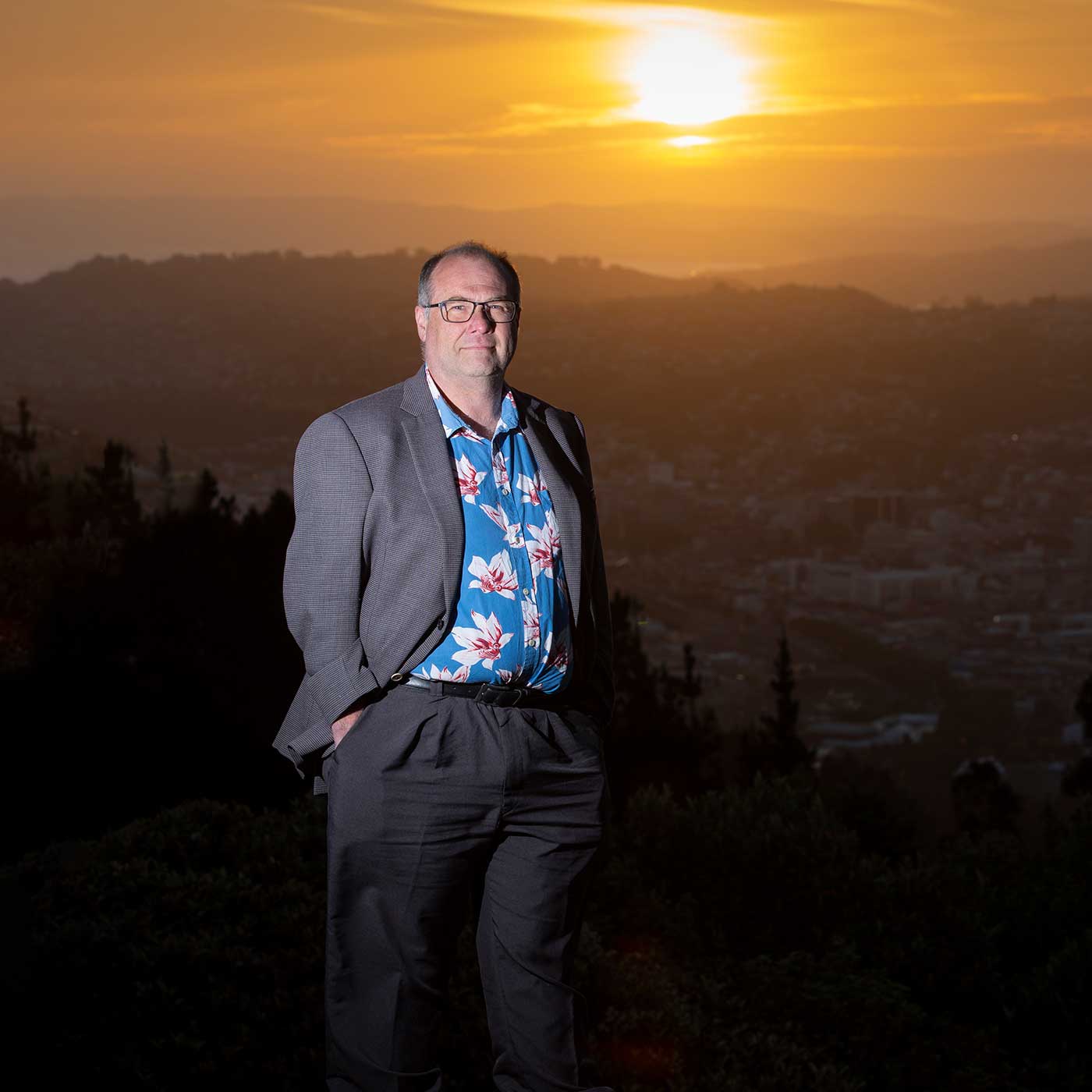 Professor Craig Rodger has received $15 million from the Ministry of Business, Innovation and Employment to investigate the threats posed by space weather, particularly on electricity networks. How significant would the impacts be and how can we mitigate against this?

With the world increasingly reliant on electrical networks – be they power or data – scientists are keeping a wary weather eye on threats posed by “space weather”.

Professor Craig Rodger (Physics) is one of a growing number of researchers working in the field and has recently been awarded a $15 million MBIE Endeavour Fund grant.

“It’s a relatively new field and comes down to the impact of processes occurring in space – usually triggered by happenings on the Sun – and how those processes influence our local environment, normally with a focus on technology.”

Rodger uses the example of radio blackouts caused by the Sun blowing radio waves into space, which are stronger than those being produced by radio transmitted on Earth.

“A good example of that would be GPS, that has satellites with quite weak transmitters.

“Something’s happened on the Sun – we have half a day. What should we do and what could we do?”

“Occasionally the Sun goes bang, overwhelms the GPS transmitters and all you’ll hear is the Sun. So that’s an example of space weather.”

But the big threat occupying Rodger’s focus is the one posed to electricity networks.

“So, if the Sun goes bang and throws out a whole lot of material – think of it as a big pillow of plasma coming from the Sun: a solar tsunami.”

While it takes about eight minutes for light from the Sun to reach Earth, the sort of material Rodger is talking about would take about a day and a half to get here.

Earth is surrounded by a magnetic field, but the solar tsunami would kick off a magnetic storm, compressing that field and changing the magnetic field on the ground. The resulting current would be a danger to electricity networks around the world.

“A big event might only amount to 10 volts per kilometre, but that will produce currents flowing in electricity networks.

“If you have a line that is a hundred kilometres long you could suddenly be getting hundreds of amps that aren’t meant to be there. It’s enough to cause transformers to be overloaded and burnt out.”

The downstream impacts would be enormous, affecting hospitals, food storage, ATMs, computer networks and the many other things that rely on a functioning power grid.

To understand the risks better, Rodger and his colleagues have been studying a big magnetic storm in Canada in 1989, that didn’t cause any physical damage because the protective relays flipped in, but it caused a blackout, taking out Quebec’s power system for half a day.

There have been experiences closer to home, too. During a geomagnetic storm in 2001 a transformer at Dunedin’s Halfway Bush was burnt out. Consumers never noticed because Transpower was able to absorb it thanks to redundancy in their system.

“What we’re worried about is if we have a one-in-a-thousand-year storm, one of these rare events like a big earthquake that causes a lot of damage to the electricity network,” says Rodger.

American studies, for example, suggest an event like that could take out 20 per cent of their power grid and force them to replace potentially thousands of transformers.

“The trouble is the transformers are built to order. It could cost anywhere from half-a-trillion to $5 trillion a year.”

A rough calculation for New Zealand suggests the loss of about 15 per cent of the country’s transformers.

“Of course, it’s unlikely only New Zealand would be affected. Large fractions of the world would be impacted. They would be going to transformer manufacturers for replacements – and is New Zealand going to be in the front of the queue or the back of the queue?”

Rodger says the research will assess how likely this is to happen.

The researchers are talking a lot with Transpower, which Rodger describes as being very advanced in this. They are also working with the US power industry, which is also taking a long hard look at it.

They are even working with First Gas, which own most of the natural gas pipelines in the North Island, to see what impact current flows could have there, particularly on corrosion protection systems that artificially change the voltage of pipes to make normal chemical oxidation less likely.

Rodger says New Zealand’s size, plus the fact that electricity distribution is essentially a monopoly, means Transpower has been able to provide a lot of data – initially encompassing 15 years of measurements – to work with.

“So we went from nowhere to the most knowledgeable group in the world who could go away and publish.”

What they found was that even in such a small country there was great variation. For example, the risks in Dunedin are different from Cromwell.

“Even with quite small distances inside New Zealand you get really different numbers. Even within a substation one transformer could be more likely to burn out than another,” says Rodger.

Dunedin and New Plymouth are known hotspots. In fact, it was a 2017 event that left some transformers in the Taranaki area mildly distressed, which piqued Transpower’s interest in getting this research done.

Just why these areas appear to be hotspots is not so clear.

“It’s all a bit like doing research on the Southern Alpine Fault. We know it’s going to happen one day and we want to do some research to think about it.

Scientists are working hard to develop real-time predictive models they hope will eventually tell them how a particular solar event is likely to impact on Earth.

“They have offered to give us high-resolution output from that model for New Zealand and I want to take that for a few years, then compare their predictions to reality. If it works well we can say to the New Zealand energy industry, here is a prediction technique you can trust.”

Australia already has a space weather prediction system and Rodger thinks they should be able to work in with them as well.

When it comes to mitigation, Transpower can reconfigure the network in tens of minutes, because New Zealand’s network is relatively small. Other countries don’t have that luxury, although networks in the US are already adept at steps such as re-routing power around thunderstorms.

Rodger says if a massive solar tsunami was threatening, power distributors could even consider turning off their network, but that is not a trivial move and poses some big questions such as how do you bring back a whole network when it has been shut down?

“What you can think about doing is using redundancy in the network. Take spare lines and transformers out of operation for the length of the storm. We can also harden the gear – if we know where the hotspots are.”

They are working closely with network control room engineers who have already begun improving their mitigation protocols.

It is a collaborative project that stretches well beyond Otago, with New Zealand partners such as GNS, Canterbury and Victoria Universities and even the Otago Museum which is going to lead an outreach effort to other museums, schools and marae.

“Ngāi Tahu have been seeing aurora for hundreds of years and they have their stories about what it is.

“Otago Museum is going to take some of that, connect it to the modern science and take it to New Zealand so we can talk about the stories about aurora and how we can understand it now.”

Internationally they are working with the British Geological Survey and the Canadian and American space weather bureaus, as well as the University of Texas at Arlington, where a researcher is running the US Space Weather Modelling Framework to work out what would happen if there was a solar event.

“I’m really pleased MBIE has chosen to invest some money in thinking about this,” says Rodger.

“We will learn things that will be useful to the world by doing this research, but we will be doing it in a New Zealand context to learn about the hazards of this country.”

Professor Craig Rodger: “What we’re worried about is if we have a one-in-a-thousand-year storm, one of these rare events like a big earthquake that causes a lot of damage to the electricity network.”