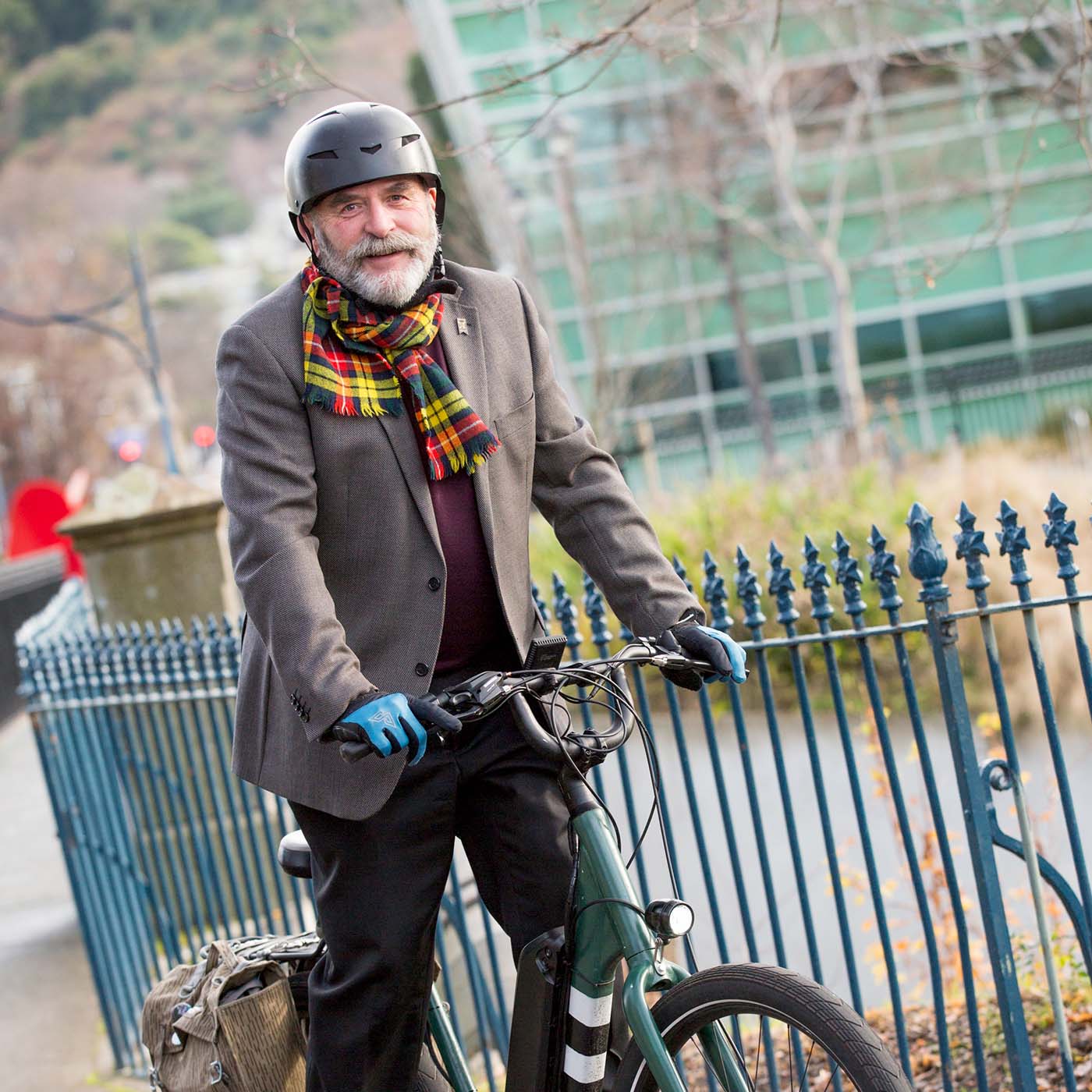 Jamie Gilbertson was the person the University community often turned to when there was no roadmap, but he is charting his own path now, into retirement.

Asking people about the college warden who worked on the Dunedin campus for 20 years sparks everything from tributes to banter:

“He’s one of the wisest and kindest people I know … now I’m starting to get emotional.”

“He’s a cornerstone of our University.”

“He’s a support system for a giant moustache.”

“In challenging situations, no-one walks away with any less mana.”

“He’s larger than life. A character. He’s a real presence in a room – in a good way.”

“He brings people together.”

With a background in the military and social work up to a national level, after his arrival on campus in 2002, Gilbertson quickly became a University-wide go-to for complex issues with young people, including some in unmapped territory not covered by policy or practice. That was recognised when he became Otago’s first Senior Warden for all the residential colleges in 2017.

The immigrant from South Wales who, with his parents and two brothers, escaped lack of opportunity by coming to New Zealand in 1957, had flags flying above Arana College in his honour as he exited the University in December – a Welsh dragon and a Christmas celebratory flag.

He also finished his career in an office metres from the University’s landmark Clocktower building: “How did that happen?,” he asks.

It was Gilbertson’s wife, Tina, who spotted the ad for the Arana warden’s job.

“Community leadership looked really attractive to me,” he says. It also offered him a chance to stop working during the week in Wellington away from a family that included three young sons.

“I gave myself over to college and University life. The best job I’ve ever had was being a college warden,” he says. “Young people coming to University and finding themselves, that’s where the joy lives, and the challenge.”

While taking responsibility for hundreds of other people’s teenagers can involve working huge hours and never-ending multi-tasking, Gilbertson says he loved it.

“It didn’t feel like a job, it felt like a vocation. When you’re at the college, there’s always someone saying hello, opening a door, wanting to play a game, wanting to talk to you, having difficulty with their course, a broken bone or a broken heart, a death at home … that’s where I can help.”

Gilbertson says the University gave him “unique opportunities” during his career, including being its voice, literally, on radio ads.

The opportunity to meet fantastic academics, professional staff, and students also came with the job, and so did being involved in the “really exciting” multi-million-dollar building project at Arana, which led to simultaneously opening three facilities for the 2006 year: Leithview for 60 residents, Rawiri for 100, and a new kitchen, dining room and common rooms.

The way Gilbertson and his management team handled the year of construction won them a University staff award for Exceptional Performance in 2006.

He was also on the Collegiate Way International Advisory Board, the University’s Board of Studies for Science Communication, the Ethical Behaviour Group, the Vice-Chancellor’s Code of Conduct Committee, the Stuart Residence Halls Council, the Limitation of Enrolment Committee and the team that wrote the University’s sexual misconduct policy.

If Gilbertson sounds grateful and reflective rather than in story-telling mode, he is. After successfully fighting prostate cancer in 2015 he was shocked in 2021 to discover he had colorectal cancer that had spread to his lung, sending him on a “huge and difficult journey” of radiotherapy, chemotherapy, and surgery, with the distinct possibility he would die anyway.

“Lightning does strike twice. It was a very challenging first couple of weeks.”

“It didn’t feel like a job, it felt like a vocation. When you’re at the college, there’s always someone saying hello, opening a door, wanting to play a game, wanting to talk to you, having difficulty with their course, a broken bone or a broken heart, a death at home … that’s where I can help.”

Gilbertson thought he could distract himself by continuing to work, but chemotherapy’s side effects took him off campus within three days. He had to make a conscious decision to set his attitude and give it his best.

“So I went for it. That was pretty much all I could do”.

From January until late September 2021 he did not know whether he would live or die, but now he is cancer free and has a new lease on life.

His parting advice to students is be kind, work hard, try to make a difference, have a good time, don’t take yourself too seriously and if you have any low-level symptoms that could indicate a health problem, go to your doctor.

He and Tina – his partner, wise counsel, and support for 46 years – have moved onto her family’s orchard in Earnscleugh, to live in their own house with their own small cherry orchard.

They will be surrounded by children, tractors, dogs and horses: “There’s always a horse looking at you or a dog trying to steal your sandwich.”

Tina is Dunstan Hospital’s nursing director and quality manager. Jamie is making himself useful. He is not a leader but continues to be of service in many capacities. plans to make himself useful.

Two of Jamie’s sons are the Gilbertsons on campus now – Callum, a Property Services Division Facility Manager and Finn, a nurse at Student Health.

As for their dad? He is floating ideas of enhancing native bird life, promoting native plants, and getting rid of rodents. He loves taking a walk in the orchard every morning and riding his electric bike around the hills of Earnscleugh.

So think of him when there’s dew on the ground. He is outside in the crisp air, inhaling the earthy, damp smells of autumn, surrounded by bird song and watching for the swoop of the local Kārearea (native falcon).

“If my life is a glorious adventure, I’m closing a chapter, turning a page.”