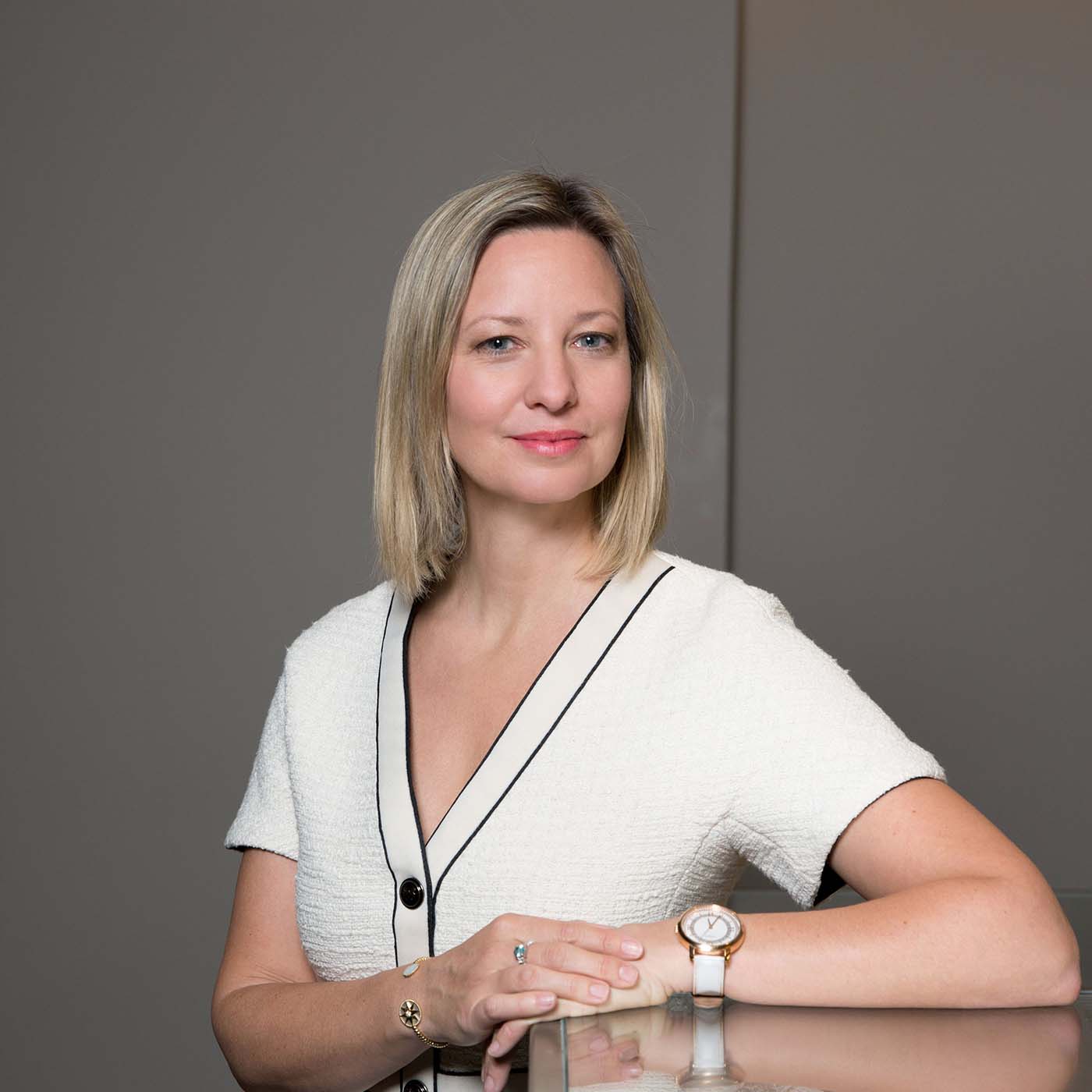 From exchange student to international CEO

Growing up in Castor Bay on Auckland’s North Shore, Anna Marsh gained a taste for business while hanging out with her parents in her father’s insurance company offices in Auckland.

“I spent a lot of time in his offices with his staff, doing filing and things after school, on the weekend and during the school holidays,” Marsh recalls. “My Mum worked in the company with him as well.”

When it came to a more formal business education, Marsh left home at the age of 17 to study commerce at Otago.

“I always dreamed of going to Otago. I had heard great things about it from friends of the family. I was fascinated by the South Island. And obviously, Otago University has an excellent reputation in business and science. So, I was pulled to Otago, like a magnet.”

Marsh spent her first year living in Hayward College, and then went flatting with a group made up of new friends and old friends from high school.

“I quite liked living on campus. In Auckland, I would have had to live at home. The first week, I remember feeling a sense of liberty. Leaving your childhood behind and embarking on a new era, along with the weight of responsibility in terms of the decisions you start making that shape your future.”

Marsh spent four years studying at the Dunedin campus, from 1997 to 2000, graduating with a Bachelor of Commerce degree, and undertaking other studies along the way, including papers in French, which she had also learned at high school. 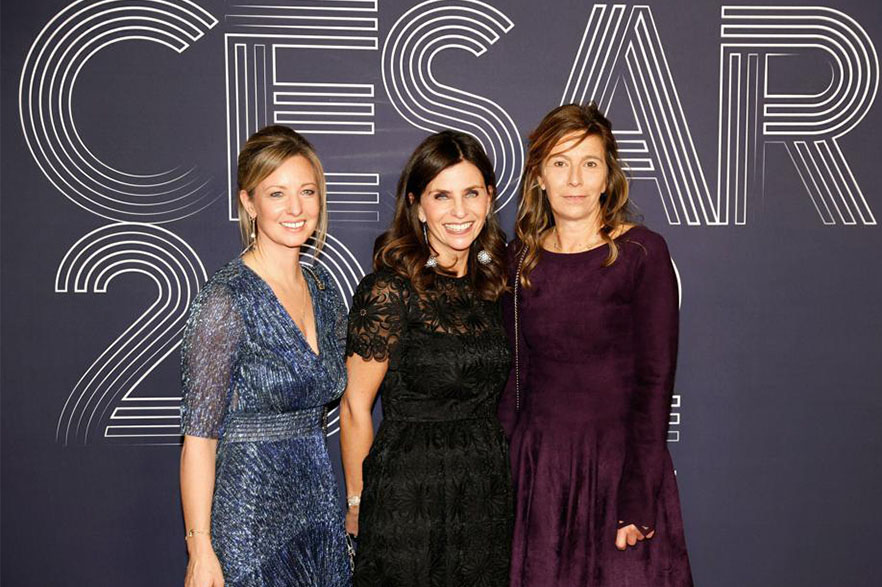 Anna Marsh (left) with colleagues at the César Awards.

She had already become enamoured with French culture, particularly French literature and film. “At high school, I would devour French movies from the local video shop with some of my friends. My dream was to live and work in Paris.”

When an opportunity arose to study commerce in Paris – through an Otago Business School student exchange programme – she jumped at the chance. “I really fell into the honey pot: so lucky.” She was simultaneously awarded a John Waddell Hayward Scholarship in Commerce towards her costs.

Marsh spent 2001 studying at one of the most prestigious business schools in France: HEC Paris. “It was like Otago. We all lived on campus. I pursued my studies in management, and I dabbled in marketing, economics and finance. Some of the courses were in French and some in English, and we worked on projects not only with French students but also with students from all around Europe, which was incredibly stimulating.”

Marsh says her education at Otago set her up well for studies at the business school.

“I was quite concerned as to whether I would be up to the French standard but, in following some of the core subjects at the business school, I found that I was able to comfortably slip into the lessons at the level required,” Marsh says. “In fact, the professors commended three of us from Otago University who had been lucky enough to have places in that business school, on our level of education and the grades we were able to achieve.”

Marsh has some advice for students contemplating similar exchange programmes today. “If the opportunity arises, I would say, ‘Don’t hesitate.’”

Instead of returning to New Zealand at the end of her studies, Marsh opted to stay in Paris and pursue her dreams. “To work in international business out of Paris was definitely a goal, and I quickly worked out that I wanted to work in film in Paris.”

During her year at the business school, Marsh had embarked on an internship at a French television production company, Tele Images Productions, and ended up working for the company for three years, selling children’s television animation, documentaries and live-action programmes to the world.

From there, she progressed to three years as the international sales manager for a group of mass media companies in France: TF1.

“Starting out in TV was a great learning curve, but TF1 was a bigger company and quite a prestigious company to be courted by, and the job covered cinema as well as television.”

“That holistic approach to life that we learned on campus as Otago students set me up incredibly well. I think, without that experience, I wouldn’t be where I am today, in so many ways.”

Marsh attributes her rise to several factors. “Hard work, determination, being results oriented, putting my hand up when opportunities arose, some great people above me who trained me and believed in me, and I think there is always an element of luck.”

She notes that men still dominate the top jobs in the entertainment industry but women are increasingly being recognised. “I think we have to support each other, definitely. Women need to give other women opportunities and allow them to pursue those opportunities through talent and hard work.”

A few facts and figures will readily indicate Studiocanal’s size and significance. Marsh heads a company that employs about 450 people across four continents, including an office in Marsh’s home town of Auckland. It owns or part-owns nine production companies, mainly in Europe. It invests about $NZ560 million each year in film and television productions, and grosses about $NZ800 million in annual revenue.

Annually, the company finances and produces more than 30 films and distributes 50 films. It also distributes more than 1,000 hours of television and library content each year. The output is in multiple languages: French, German, Italian, Spanish, Polish and English.

The library content comes from one of the largest and most prestigious film libraries in the world, currently comprising about 6,500 titles, which Studiocanal has acquired through taking over or merging with studio film libraries. It includes classic movies such as The Graduate and iconic television series such as The Avengers.

If the name Studiocanal is unfamiliar to many New Zealanders, the output certainly won’t be. The movies it has produced include blockbusters such as Tinker Tailor Soldier Spy and The Tourist. Throw in popular movies such as Bridget Jones’s Diary, and the multi-award-winning Paddington movies. Notable television series seen on New Zealand screens recently include Years and Years.

Through Studiocanal New Zealand, the company has also been involved with the local distribution of movies such as Six60: Till the Lights Go Out, featuring the Dunedin band that recently bought the former student flat where the band was formed – at 660 Castle Street – and set up performing arts scholarships in association with the University of Otago, that include living in the flat.

For Marsh, the job literally is a dream come true. “There is so much I love about my job. The immense pride of leading such a dynamic company where the people are so talented and so passionate, and creating content that is of the highest commercial quality and seen by audiences around the world. 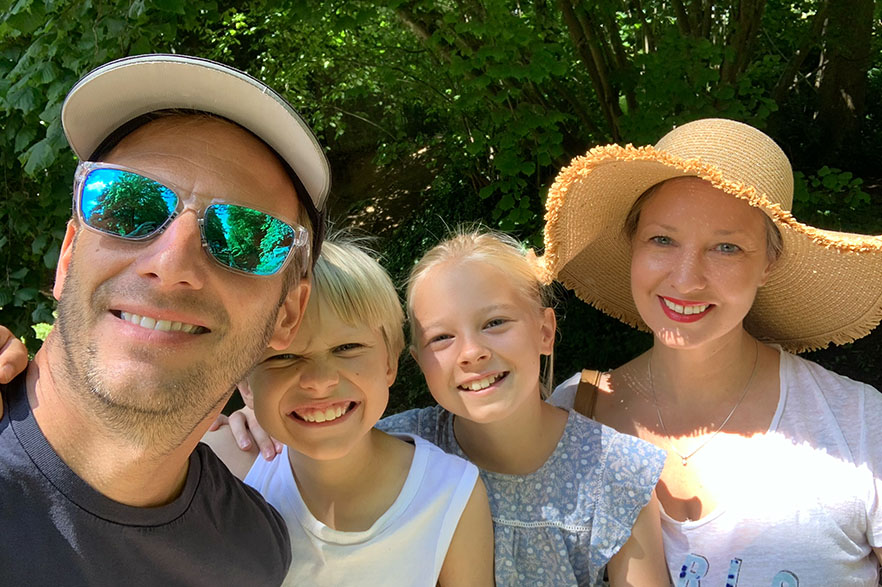 Anna Marsh with her husband Maxime Bideau and 10-year-old twins Valentin and Amélia.

“Also, making films and TV series that will be around for a long time. It’s part of the heritage of cinema. We are the caretakers of a significant part of the world’s cinematic history through our library, but we are also creating the classics of tomorrow with our new productions that will hopefully resonate for generations to come.”

What does Marsh miss most about New Zealand? “My family, obviously.” She says that the COVID-19 pandemic unfortunately put a temporary stop to her annual Christmas visits back home to Auckland.

On top of running a global media empire, Marsh, and her French/Dutch husband, have 10-year-old twins – Amélia and Valentin – to raise. Marsh says that balancing work and family life can be a bit frantic.

“It’s definitely a juggle. Long hours, but I always carve out time for the family – drop the kids off at school, carve out time for dinner and bedtime – before I connect again with work later in the evening. That, and also my husband does a lot, so I am very lucky. He had his own business but now he is focused on the family.”

Marsh reflects that her University of Otago education was a great foundation for her subsequent career. “We had been well trained, with excellent skills in analytics and critical thinking, and quite an open-minded approach to education and a worldly perspective as well at Otago.

“It also taught us to set very high standards and push ourselves to excel in everything we undertook. Not only excelling academically, but also enjoying life, whether it be in our studies or the extra-curricular activities we were encouraged to do. That holistic approach to life that we learned on campus as Otago students set me up incredibly well. I think, without that experience, I wouldn’t be where I am today, in so many ways.”