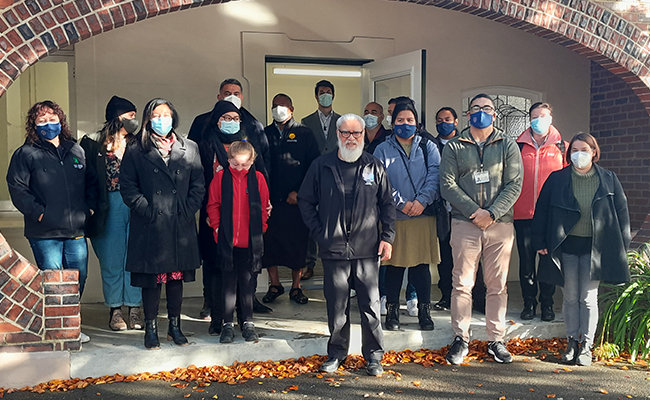 Pacific Islands Centre staff at a blessing for their new home.

The Pacific Islands Centre, which has served faithfully as a site of support, connection and celebration on the Dunedin campus, has relocated to Castle St.

After 20 years in the widely-recognised small yellow building on Leithbank, the centre will now be close to the Pacific Development Office, Office of Māori Development and Te Huka Mātauraka.

Pacific Islands Centre Manager Tagiilima Feleti says the move will facilitate closer collaboration between these offices, particularly in supporting the goals of their respective strategic frameworks.

“It’s how we grow that village mentality at this end of the University,” he says.

Mr Feleti says the relocation was about “how [the centre] could better serve the needs of the growing Pacific student community”.

The previous location was a short walk from campus and was shrouded in the shadow of the Otago Business School.

“It felt so distant on that side of campus, whereas the new centre has a different feeling. You feel connected to campus and I think the students feel that coming in,” says Mr Feleti.

“Location is key. I knew that if we had a good location we were going to get students coming in, staff coming in, even members of the community coming in.” 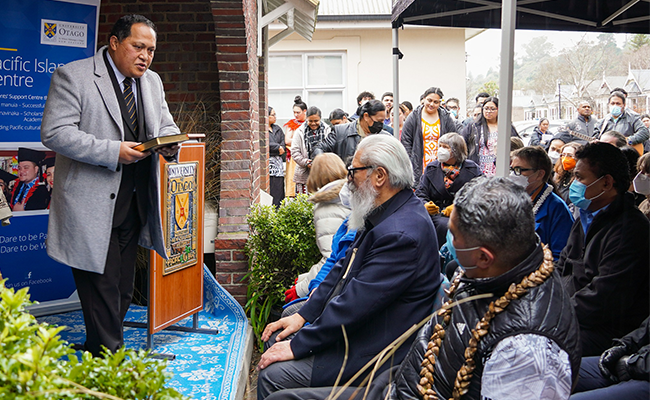 Pacific Islands Centre staff say students have responded positively to the central location of the new building, the size of the space and the sense of home it imbues.

The move to a larger space was welcomed by staff at the Pacific Islands Centre, who had previously worked out of two separate buildings due to space limitations.

“We relocated because team dynamics were changing,” Mr Feleti says. “Our team was growing and I wanted to be able to have the whole team work together in one building.”

Mr Feleti hopes that non-Pacific will also engage with the new space.

“Yes, it’s a hub for Pacific, for students, staff and the community, but it’s also a resource for those who are non-Pacific to be able to come here and feel like they can connect and be a part of it.

“It’s about how we can build cross-cultural practices that work for everyone and we welcome anyone to come to this centre and be a part of this whole village.”