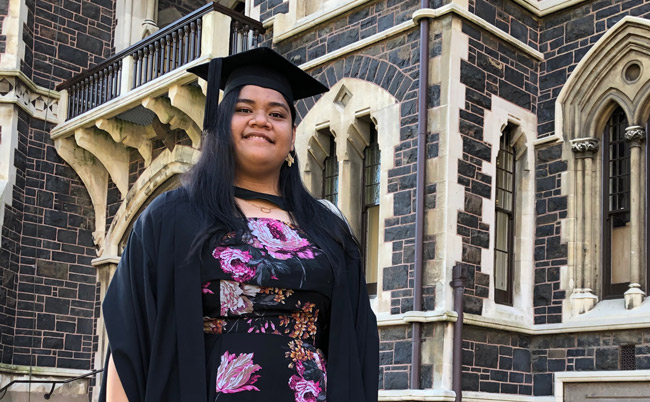 Eliana Viali is ready for her next challenge when she takes her new degree back to Samoa.

Eliana Viali knows she will have more challenges than most people starting a new job when she takes the skills of her new degree home to Samoa.

The 22-year-old graduated on Saturday with a Bachelor of Physiotherapy, and plans to become just the fourth physiotherapist based at Tupua Tamasese Meaole Hospital.

Physiotherapy has traditionally had a low profile in Samoa and the benefits are often not recognised, Eliana says.

“I think because we don’t know what it is and we don’t understand the physical benefits, physiotherapy isn’t held in very high esteem. We’ve lasted this long without physiotherapy but I don’t think we’ve had the best quality of life in terms of rehabilitation from strokes or injury.

"There are other careers, like being a doctor and lawyer, that are more esteemed. Trying to change those ideas will make this job a bit harder."

“People actually don’t know what physio is unless it’s involved with rugby.”

While based at the 200-bed hospital for a placement last year, Eliana was constantly asked by doctors if she would be going on to study medicine.

“It just wasn’t understood that I’m doing what I want to do and it has immense value. There are other careers, like being a doctor and lawyer, that are more esteemed.

“Trying to change those ideas will make this job a bit harder,” she says.

However, she is not focussing on the negatives and instead thinking about how she can help people while raising the profile of the profession.

“I feel like physiotherapy is very Pacific in terms of its values. It values people enough to sit down and talk and get to know people.”

Challenges are something Eliana is used to, having overcome major ones in the past four years.

Having come from Samoa to Otago on a New Zealand Aid scholarship, she was not prepared for life so far away from her family and support network.

“Seventeen-year-old me thought she knew everything, thought she’d be fine. She didn’t and I’ve been knocked down a couple of pegs since then.”

"I reconnected with family, with my church and my friends. That was a life saver for me. It helped settle me. I came back as me again."

Eliana’s father, Honorary Otago Fellow Dr Satupaitea Viali, is a cardiologist in Samoa, and she knew she always wanted to follow his footsteps and “help people” in a health profession, she was just unsure what discipline.

“Dad was a huge advocate for the Pacific support at Otago, so I knew I was coming here, but I knew nothing about physio at the time.

“It wasn’t till I was here and learned about physiotherapy that I realised I wanted to do it.”

However, her grades started to slip and she stopped attending classes when homesickness overwhelmed her.

“I didn’t realise how much of a homebody I was. I made friends here but I started losing who I was. I felt isolated and I was depressed.”

She took second semester of her second year off and went home, with the blessing of her lecturers.

“I reconnected with family, with my church and my friends. That was a life saver for me. It helped settle me. I came back as me again.”

Being part of the Pacific Island Health Professional Students’ Association, support from the School of Physiotherapy and Pacific Island Research and Student Support Unit was crucial to her success, she says. So much so, she plans to return to Otago for further study in a couple of years.

“I’ll probably return to do my Master's. My aim is life is to help people and contribute to society and that’s how I can best do that.”