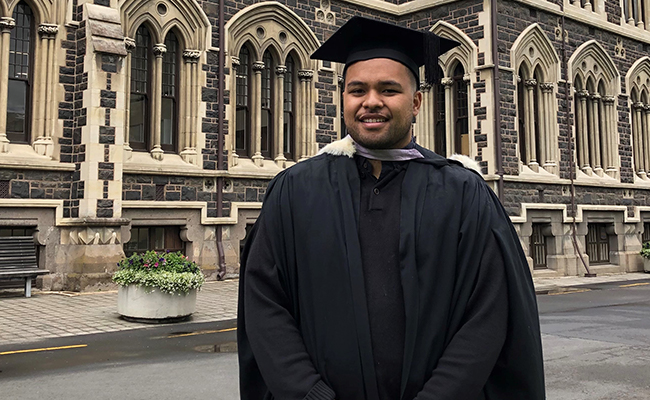 Iuliano (Jono) Tinielu graduates with his Bachelor of Medicine and Bachelor of Surgery on 12 December.

The largest number of Pacific students to graduate in Medicine from the Otago Medical School will include the first two graduates from the POPO Foundation Scholarship Programme. Iuliano (Jono) Tinielu shares his journey.

Iuliano (Jono) Tinielu always wanted to follow in his grandfather’s footsteps and become a doctor.

But that wasn’t looking promising as his schooling progressed.

“I enjoyed school, but I wasn’t very focused. I didn’t struggle with the content just the motivation,” he says.

One of six children, Jono was brought up in “quite a tough area” in Porirua after his parents moved to New Zealand from Tokelau in the 1990s.

He attended Decile 1 primary and intermediate schools and his high school years at Aotea College were interrupted by a period of schooling in Australia.

When he returned to New Zealand, he passed all the exams he was able to sit. But that wasn’t sufficient to achieve the overall qualification and he finished school without NCEA.

Despite this, Jono still wanted to go to university and study medicine.

“My granddad Iona Tinielu was a doctor in Tokelau. He was an inspiration. That was the main reason I wanted to be a doctor. He wanted a grandkid to follow in his footsteps.

“I just didn’t know how to go about applying to come to uni. None of my immediate family members had been to university so I didn’t know anything about it.”

What he needed now was a pathway. That appeared in the form of a careers counsellor who directed Jono to the POPO Foundation Scholarship Programme at Otago.

This programme supports 10 Pacific students with a Foundation Year course as a bridge to studying the Health Sciences First Year course at Otago.

Moving to Dunedin was a culture shock but Jono soon settled in with the help of the University’s Pacific Islands Research & Student Support Unit.

Jono did well in Foundation Year and, his confidence boosted, made it through the Health Sciences first year course and into Medical School.

Several years of hard work later, he’s proud to graduate in Medicine but also realistic that crossing the stage is merely the start of a long road ahead.

“I’m really happy to get through my degree but I don’t know if I feel like I can celebrate because it’s just the beginning of my medical career and it’s going to get harder,” he says.

He will work in Timaru as a House Officer for the next two years before deciding on specialty training.

He won’t be the only health professional in the family as his twin sister Grace is a nurse.

Ideally his career will eventually allow him to take his skills back to where he grew up.

“I’d love to end up back home to Porirua but I’ll have to see how my training goes.