More than meets the eye in pharmacy

The School of Pharmacy's first Otago-Singapore Ambassador is an enthusiastic proponent of the concept that pharmacy is much more than preparing, packing and dispensing medication.

“There is more than meets the eye in pharmacy,” Nadiah Rusyidah Roslan (22), says.

Patients often view pharmacists as simply providing medication, she says. However, when doctors prescribe medicine, the pharmacist checks the dosage and whether that medication suits the patient.

“We do think about the patient's perspective; is the medication suitable for them, are they taking the medication well....We do a lot of communicating with other health professionals.”

The Malay Singaporean is a third-year student at the School of Pharmacy. The International Ambassador programme grants P2 and P3 students $300 for travel to assist them to return to their secondary school and promote pharmacy. Applications for this year's Ambassador programme are the highest yet, with 13 students applying to return to their home school. 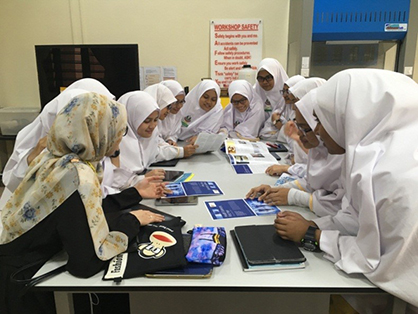 Nadiah met with about 30 students at her former school, the Alsagoff Arab School, in Singapore in February. As far as she knows, she is the first person from her school to study at Otago. 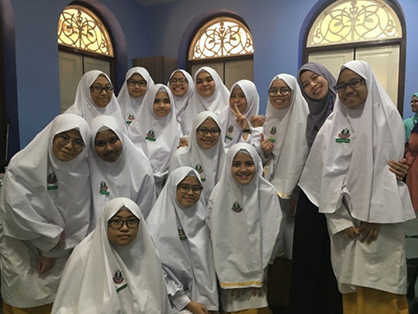 Nadiah with secondary four students in their classroom after an information session on pharmacy.

“It was really nice to have a chat,” she says. “They didn't have any idea about the school here in Otago.”

Nadiah says such students usually attend university in Australia or the United Kingdom. She told them about the University of Otago and science courses, and will be a contact person for any Singaporean students wanting to study at Otago.

She's been studying for a Bachelor of Pharmacy at Otago since February 2017, having completed a Diploma in Pharmaceutical Sciences at the Republic Polytechnic in Singapore.

Her passion for pharmacy began years ago, when her father shared stories of being a dispenser in charge while carrying out his national service in the Singapore Army.

“I was intrigued by his knowledge, skills and experiences, which aroused my curiosity on how medicines work to cure our illnesses.

“'How could a small candy-shaped pill possibly make one feel better after consumption?', I have always asked myself.” 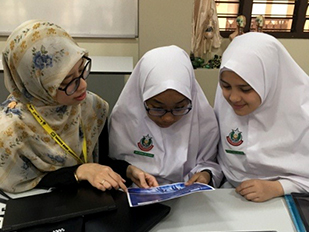 Nadiah's desire to know more about this medicinal world led her to pursue pharmacy.

She says that studying at the School of Pharmacy has built upon what she learned for her diploma.

“I feel like here I learned a lot more and a lot deeper.”

The committed student values the “hands on” work in the dispensing lab, making preparations such as suppositories, creams and ointments.

Long-term, Nadiah would like to undertake medical research, particularly into developing drugs from natural sources.

“I would be interested in one day doing research into the natural products that would benefit humans.”

Nowadays, the student is enjoying Dunedin city, including that most students live near the university and can usually walk, rather than relying on public transport as in larger cities.

She also appreciates Dunedin's diversity and the many Asians, Malaysians and Koreans: “That multiracial feel actually reminds me of Singapore.”

Article written by Sharon Fowler for School of Pharmacy Newsletter V3I1, May 2018