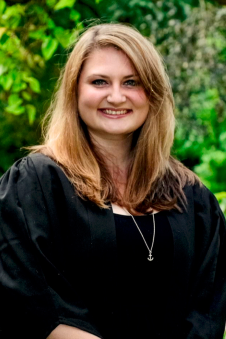 Already planning to move away from Auckland when she finished high school, Carys Goodwin visited Otago’s campus and fell in love. Out of interest she enrolled in POLS104 International Relations, and fell in love again!

She thought she had found her niche in international relations, but on the advice of a friend, enrolled in POLS319 Treaty Politics and realised just how thoroughly different political fields intersect. Her advice to future Politics students is “try some of everything. The strength of Otago's Politics Department is its breadth. In one degree you can take anything from political philosophy to environmental politics.”

Her ‘try some of everything’ ethos extended far beyond the classroom, and Carys reflects fondly on her Otago days. “My time at Otago was incredible! Just a few of the highlights were the people I met, my exchange to Boston in 2013, being Politics Editor of Critic during the 2014 election, BYOs at Taj Mahal, and the day I handed in my honours dissertation.”

Carys’ BA(Hons) in Politics and DipLang in Spanish secured her a position working for a Member of Parliament in the Green Party. The job was incredibly varied, and even included a secondment as the Climate Advisor. In this role she was able to put all her Honours skills and knowledge into practice to help prepare Green MPs to go to COP21 in Paris.

Her passion for climate change led to her recently embarking on an MPhil in International Relations and Politics at the University of Cambridge. Her research is focused on the international climate change system, and yes, she’s definitely in love all over again!