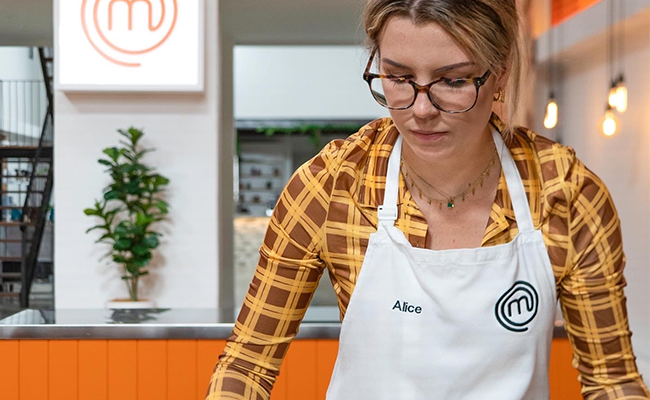 As a kid, Alice Taylor watched MasterChef on TV and wondered what it would be like to compete on the show.

More than a decade later the Otago Master of Politics student got to find out.

Making food is one of Alice’s life-long passions.

She says she has been surrounded by “good food and cooking” since she was small.

“My whole family loves food. My dad is a fantastic cook, my mum used to bake when I was really young, and my grandma was a fantastic baker.”

She was intrigued by the process of cooking and enjoyed watching her dad improvise as he put meals together.

“Especially in my teenage years, it was a really great way to sort of bond with my dad and maintain that relationship.”

MasterChef New Zealand, which first screened in 2010, is a reality show that sees amateur cooks battle it out in the kitchen for first place.

Alice says watching the show added to her love of cooking.

As she neared the end of her master’s degree in February this year, she found herself at a crossroads unsure what she was going to do with her life.

She had thought about working in the food industry but never committed herself to it.

That is until her dad texted her to say that MasterChef New Zealand was returning after a five-year long hiatus: “It’s coming back, and they're doing auditions”.

She knew what the show had done for people’s careers and thought ‘why not just go for it’.

“I never thought I was going to get on the show. Like, I genuinely applied and actually just sort of, not forgot that I had applied, but when I got the call back, I was so shocked,” Alice says.

“It was it was a dream come true; I had an absolute blast.

“And I think the bit that surprised me the most was the friendships that I made, because I didn't really think about that side of things before going on the show. But I made these incredible friends.”

As of Monday, 11 July, Alice was still in the competition and unable to discuss how the show ends. She could, however, talk about her favourite thing to make, which is a ginger cake.

Her ‘true love’ when it comes to creating with food is cakes and baking.

She says as the show progressed she became a better cook, and believes she has made better cakes since competing, but her ginger cake recipe holds a special place in her heart.

“I have some nostalgia and a really emotional attachment to the recipe; I think it’s great.”

It’s easy to make and everyone loves it, she says, also noting that for her, cakes aren’t about frosting and other embellishments.

“My style of cakes is just like beautiful, delicate, simple cake.”

She isn’t one for adhering too closely to a recipe: “I don’t bake like a really methodical person”.

“I sort of took on the lessons that my dad taught me about cooking and applied them to desserts baking. I just sort of like to throw things in.”

Her ginger cake recipe can be found on her Instagram @alicetayloreats

She encourages students to have a go at baking, saying don’t be discouraged if it doesn’t turn out perfectly first time.

“Our society as a whole is obsessed with perfection and the idea you have to be perfect at something the moment you begin.

“Just start baking and don’t take yourself too seriously. It’s probably not going to be incredible at first, but you’re learning. It’s all about trial and error, enjoy yourself.”

Alice’s master’s thesis was on Taiwanese foreign policy and security. She had to finish it early, two days prior to auditioning for the show.

She finished her degree as joint top in the class, passing with distinction, and will graduate in August.

Alice placed third in the competition on Monday evening, leaving Sam and Elliot to compete.