A PhD at opposite ends of the earth 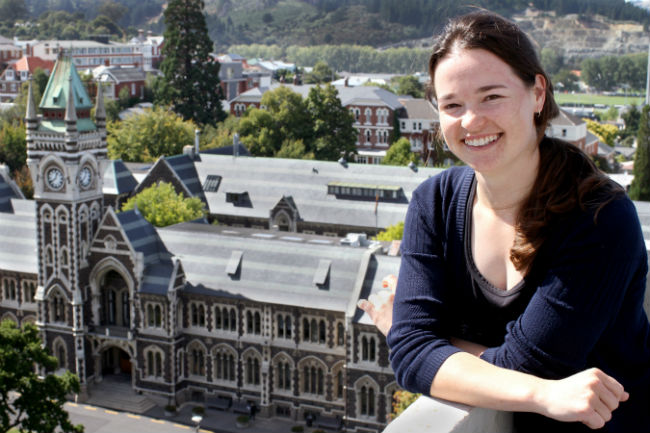 With her Chemistry PhD submitted and a ‘post-doc’ job lined-up in the USA, Cleo Davie-Martin is aware she owes much to Otago – not least the memories of her Alaskan field work.

Cleo says, “I study the distribution of organic contaminants. First, I modelled what percentage of pesticides applied to a field would evaporate under certain conditions.

“Then in the lab I looked at the distribution of pesticides between the soil and the air. Pesticides drifting off site can cause problems and we want to be able to predict and regulate their use before we start applying them in tonnes. That was the driver for that side of my project.”

Research on a global scale

“You find them in everything from electronics to upholstery,” she says. “As the products age, the flame retardants leach out into the atmosphere, transferred by wind until they get to an area that’s cold enough to trap them – in mountainous or polar areas. That’s why I went to Alaska.”

With funding from the US National Science Foundation and contacts provided by her co-supervisor Professor Yu-Ping Chin of The Ohio State University, Cleo travelled to Toolik Field Station within the Arctic Circle, nine hours drive from Fairbanks city.

“It was by far the highlight of my PhD,” Cleo says, “I was there for two and a half months collecting air and water samples and sending them to New Zealand where I would extract the flame retardants to see what I had and in what concentrations.

“The Alaskan Inuit don’t use these compounds, but they end up with them in their bodies because they eat the local wildlife. That’s what really draws me in; it just seems so unfair, and it’s all so far removed from the rest of world that it’s hard for others to comprehend.”

She says another major highlight of her Otago experience, and one that helped secure her new job at Oregon State University, was learning how to operate, fix and maintain the instruments she used during her research. Her new work will still involve researching the atmospheric transport of contaminants, but she will also be a lab manager, helping students use and run instruments.

Find out more about Environmental Science at Otago