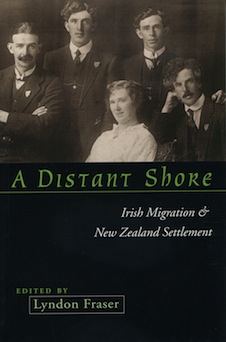 This book about New Zealand's Irish heritage offers the view that colonial New Zealand was more multicultural than we have been led to believe. Eight writers - most of Irish descent - have produced A Distant Shore: Irish Migration and New Zealand Settlement.

Editor Lyndon Fraser says "A Distant Shore moves us towards a multicultural, more inclusive history of New Zealand". It focuses on Irish migration in the nineteenth and early twentieth century, making new research accessible to the general reader. In the first chapter, Don Akenson, a Canadian-based professor of history, asserts that biculturalism is an inadequate framework with which to view the past. This theme surfaces throughout the book as the contributors illustrate the differences between Irish and English culture. Akenson also places New Zealand Irish in the context of the worldwide Irish diaspora.

An internationally celebrated scholar in the field of Irish Studies, Patrick O'Farrell, explores the complex nature of Irishness, how it developed and how it has been defined in New Zealand. Alasdair Galbraith rediscovers the 'invisible' but influential Irish Protestant tradition in colonial New Zealand, revealing the prejudices against Catholics, and how Protestant migration was encouraged.

By analysing information from passenger lists and death registers, Terry Hearn constructs a composite profile of Irish migrants: their origins in Ireland, their occupations, where they settled, their age, sex and marital status, contrasting these with statistics on the English, Scots and Welsh. Strong connections with the Irish on the Australian goldfields are revealed, particularly in Hearn's chapter on the Irish in the Otago goldfields, and in a chapter on Irish migration to the West Coast by Lyndon Fraser. These two chapters also highlight regional variations in migration patterns.

Angela McCarthy looks at migrant women's letters, which offer a personal glimpse into how these women from a variety of backgrounds adjusted to their new environments. She shows the critical importance of kinship links for Irish women, with family in Ireland as well as in New Zealand and across the Tasman, using personal letters as one of her sources.

No book on the Irish would be complete without politics. Sean Brosnahan explores Irish issues in New Zealand from 1916-1922, looking at the changing views on Irish nationalism sparked by the 1916 Easter Rising in Dublin. He also discusses conscription issues, and gives fresh insight into Irish support for the emerging Labour Party.

In the final chapter, Rory Sweetman portrays the organisation and development of the Hibernian Australasian Catholic Benefit society in New Zealand, and offers an account of Hibernian responses to political events in Ireland.

A Distant Shore provides an excellent overview of Irish migration to New Zealand, and will appeal to people with Irish ancestry, to genealogists, and to anyone with an interest in New Zealand history.

LYNDON FRASER worked as Concept Developer for the 'Passports' exhibition at Te Papa National Museum and now teaches historical sociology at the University of Canterbury. Dr Fraser is a specialist in ethnicity and migration. His first book was To Tara via Holyhead: Irish Catholic immigrants in nineteenth-century Christchurch (1997) and he recently co-edited (with Angela McCarthy) Far from 'Home': The English in New Zealand (Otago University Press, 2012).

'New Zealand's origins are multi-cultural and this is an excellent introduction to one of the contributing cultures.' – Sunday Star Times

'This is a great collection of essays that brings to life and colour the Irish diaspora and its impact on the history of New Zealand.' – Patrick Cole, New Zealand Catholic