The autobiography of Dom Felice Vaggioli 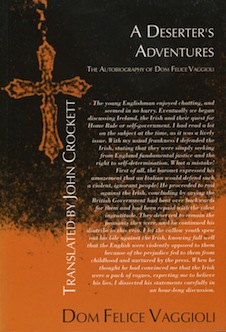 Dom Felice Vaggioli wrote this autobiography between 1909 and 1911, after the publication in Italy of his History of New Zealand and its Inhabitants. One of the first Benedictine monks to be sent to New Zealand, he arrived in 1879 and returned home in 1887, having worked in Gisborne, Auckland and the Coromandel.

The manuscript remained in the archives of Viaggioli's monastery and was never published. It was found by John Crockett while researching the background to his translation of the History. Its New Zealand section is published here for the first time, with an essay by historian Rory Sweetman.

'A Deserter's Adventures' is Vaggioli's title, as he was a concientious objector, or 'draft-dodger', as a young monk and so termed himself 'a deserter'. This is typical of the individual who emerges from these pages: always questioning, and always applying a strong sense of justice and fine logic to the many dilemmas he found himself in as a missionary priest in New Zealand.

DOM FELICE VAGGIOLI (1845–1921) was a Benedictine monk from Tuscany. As a youth he was a conscientious objector, avoiding compulsory military service by hiding in a region which was under Austrian rule. He began his novitiate in 1864 and was professed a religious the following year. In 1876 he was sent as a missionary to Tunisia, and three years later to New Zealand.

Vaggioli was first appointed parish priest in Gisborne, and was entrusted with the job of clearing the parish debt. He then performed similar tasks at St Benedict’s church in Newton, Auckland. However, the stress of debt collecting resulted in his health deteriorating and after a brief holiday he was appointed to Coromandel. In 1888, after his return to Italy, he assumed the important post of Abbot Visitor of the Italian province of his order, until 1896 when he ceased this role to concentrate on his writing. From 1910 until his death he occupied the prestigious position of Superior of San Giorgio Maggiore monastery in Venice. Vaggioli was known for his austerity, intellectual curiosity and frankness.

JOHN CROCKETT was born in Auckland in 1946 and attended Holy Name Seminary in Christchurch to begin studies for the Catholic priesthood. He then spent four years at Propaganda Fide College in Rome, where he received a theology degree and was ordained as a deacon, but decided not to become a priest. On returning to New Zealand he completed a BA in history and Italian and an MA in applied sociology. He has worked as a social worker and counsellor and currently works at Student Health at the University of Auckland. He translated the first volume of Vaggioli’s History of New Zealand and is also working on an historical novel, Nga Roimata, based on the journey of two students, Māori and Pākehā, who were sent to Rome by Bishop Pompallier in the mid-nineteenth century.