Amassing Treasures for All Times 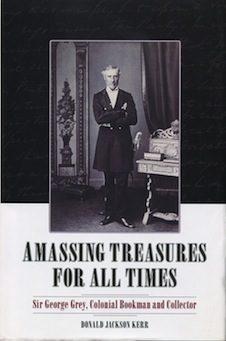 Sir George Grey, governor of New Zealand, South Australia and the Cape Colony, was an outstanding British colonial statesman in the nineteenth century. Brilliant and inscrutable, Grey, who was in contact with key Victorians from Darwin to Whately throughout his life, played a central role in overseeing the development of British colonies into politically autonomous entities. Less well-known of Grey is that he was also an obsessive collector of rare books and artefacts, which he selflessly bequeathed to the people he governed. This study, written by a former librarian of the Auckland Grey Collection, sheds desperately needed light on the genius and magnanimity of an increasingly controversial figure, demonstrating the complex humanity underlying his apparent remoteness. It is the first study on Grey of its kind.

DONALD KERR is Special Collections Librarian at the University of Otago, New Zealand. His doctoral thesis, from which this book is partly drawn, looked at Grey's strategies as a collector of rare books in the colonies he governed, and at the network of associations which he established with many of the prominent booksellers of his times. Dr Kerr was formerly Rare Books Librarian at the Auckland Public Library, which houses New Zealand's Grey Collection. He has edited a book on Charles Brasch (Enduring Legacy: Charles Brasch, Patron, Poet, Collector, Otago University Press 2003), written a book on the history of duelling in New Zealand called The Smell of Powder (2006), and his most recent publication is Hocken: Prince of Collectors (2015).

'Kerr asks critical questions. What did colonial officials read, what did they collect and how was this accumulation ultimately dispersed? Under what disadvantages did colonials operate as they attempted to build libraries at great distances in space and time from the European source of the books? And, more nuanced, how did the purchaser read the books and annotate them? And how did the books contribute to the mental development of the reader? ... The most significant library philanthropist of the English-speaking world, Andrew Carnegie, declared Grey "the truest & greatest prophet of our day", and Carnegie was his "grateful Disciple".'
– The Journal of Imperial and Commonwealth History, Vol. 36, 2008