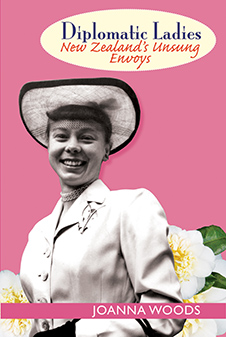 Starting with Maud Pember Reeves in 1907, the author traces the evolution of New Zealand’s diplomatic service through the experiences of the women who accompanied their husbands to posts all over the world. It is a life full of interest and excitement, but in terms of family relationships and personal fulfilment, it comes at a price that many modern women are not prepared to pay. In this frank and authoritative account of what living on the cocktail party circuit is really like, the author pulls no punches about the downsides, especially the toll that it takes on the children. Nor does she shrink from recounting a few incidents in which wives or partners have been less than diplomatic. This is a collection of exciting and entertaining stories which not only shows what the wives have contributed to New Zealand’s diplomacy, but also reveals the true nature of the diplomatic world.

JOANNA WOODS was born in Dublin but has been based in New Zealand for many years. During her husband’s diplomatic career, she has lived in Bahrain, France, Greece, Iran, Italy, the United States and Russia, where she gained her doctorate on Katherine Mansfield from Moscow State University, subsequently published as Katerina: The Russian World of Katherine Mansfield (2001). She is also the author of Facing the Music: A Biography of Charles Baeyertz (2008).