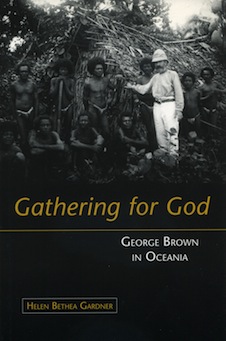 Combining 'the gathering of artefacts with the gathering of souls', George Brown was a key figure in the Christian, and especially the Wesleyan Methodist, history of nineteenth-century Oceania. Using his life as a case study, Helen Bethea Gardner examines the role of Christian missionaries in the Pacific Islands.

Brown's career (1860–1908) spanned one of the most tumultuous political periods in the South Pacific, as one by one islands were colonised by imperial nations. He was one of the most politically engaged of all missionaries, encouraging colonial rule in the Pacific by America, Britain, Germany and, eventually, Australia and New Zealand. Originally from the north of England, he worked as a missionary in Samoa from 1860, moving to the Bismarck Archipelago (now Papua New Guinea) in 1875. From the 1880s until his retirement in 1907 he worked in Sydney as the general secretary of the Australasian Methodist Overseas Mission.

Gathering for God examines Brown's missionary letters, journals and journalism, exploring how he attracted Pacific Islanders to Christian teachings, analysing his leadership during an armed attack on New Britain villages accused of cannibalism, and looking at his work in the new discipline of anthropology. He was a major collector of artefacts (his collection is now in the Osaka Museum) and photographer of Pacific peoples (his collection is in the Australian Museum).

'The book I think will make important contributions to histories of anthropology, photography and collecting, linking them in new ways to the historiography of Australian and Pacific missions.' – Centre for Citizenship & Human Rights, no. 47, pp. 5–6, September 2006.

HELEN BETHEA GARDNER is a lecturer in World History and Pacific History at the School of History, Heritage and Society in the Faculty of Arts at Deakin University in Melbourne, Australia. In 2012 she became the external editor of the Journal of Pacific History and is a former secretary of the Australian Association for the Advancement of Pacific Studies. Her most recent publication, Southern Anthropology - a History of Fison and Howitt's 'Kamilaroi and Kurnai' (Palgrave MacMillan, 2015) co-authored with anthropologist Patrick McConvell, explores the conception and writing of a nineteenth-century book of Australian anthropology.