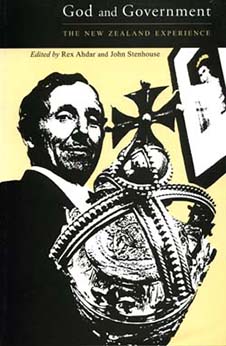 New Zealand is often portrayed as a secular society, but look at the depth of feeling stirred up in recent years by the 'Virgin in a Condom' controversy, or the Hikoi of Hope. These incidents remind us that religion continues to play a significant and sometimes controversial role in the politics and culture of modern New Zealand.

The relationship between religion and politics is the topic of God & Government: The New Zealand Experience. Drawing on the expertise of scholars in a number of disciplines, this volume explores church–state relations in contemporary New Zealand, with a glance back to the past.

As society becomes increasingly diverse, it is timely to reflect on the place and freedom of religious belief. In order to understand our past, present and likely future, we must understand the beliefs and values of all of the inhabitants of Aotearoa. The material in this work greatly enriches this understanding, writes the Right Honourable Sir Ivor Richardson, President of the New Zealand Court of Appeal, in his foreword to the book.

God & Government evolved from a conference on Church and State in New Zealand that took place at the University of Otago in 1997. This volume reproduces most of the conference papers, and summarises some of the responses to these papers in its introduction. The contributors look at church–state relations in New Zealand history, law, education and social welfare. Specific areas discussed include political parties and the political structure, inter-denominational relations, the role of the chaplain, Māori Christianity, and the rise of non-Christian faiths.

In the first chapter, titled 'Religion, Politics and the New Zealand Wars 1860–1872, John Stenhouse looks at the historical significance of religion in New Zealand. He discovers that this country was characterised by religious diversity and conflict from the beginning of Pakeha settlement.

It is widely understood today that churches have lost power in our increasingly secularised society, as the state has gradually taken over previously church-dominated areas such as schooling and social welfare. However, in a wide-ranging chapter focused on government support for the churches, Peter Lineham, senior lecturer in history at Massey University, questions this aspect of the secularisation thesis, and outlines the interdependence of church and state.

Rex Ahdar further examines the extent to which church and state are intertwined, arguing that New Zealand has long had a de facto generic Christian state. The influence of Christianity is seen in many of our laws, in our public holidays, the national anthem and so on. Ahdar gives an international perspective by drawing comparisons with the UK, Australia, the US and Canada.

In a chapter on religious pluralism, Peter Donovan, associate professor of religious studies at Massey University, explores the issues raised for Christians as a result of the increase of immigrants of other faiths in New Zealand. He looks at where inter-faith relations are heading, and at the bridge that Māori tradition offers in providing a ceremonial aspect to many events.

Religious education is the subject of a chapter by Brother Patrick Lynch, executive director of the New Zealand Catholic Education Office. He enthuses about the integration of private, religious schools into the state system, and the greater freedom of choice in matters of religious education for school boards of trustees.

The coming of proportional representation in the 1996 election encouraged the creation of new political parties. Jonathan Boston, professor of public policy at Victoria University, looks at New Zealand's Christian parties, comparing them with European Christian parties, and assessing their potential role in this country.

God & Government is a welcome addition to a subject area in which there are few books available. It will appeal to readers with an interest in New Zealand history, law, education, politics and religion, and will be of use to academics and students in these subject areas. There are notes for each chapter and a select bibliography for further reading.

REX AHDAR is Professor of Law at the University of Otago. In 1991 he was a Fulbright Senior Research Scholar at Boalt Hall School of Law, UC Berkeley. His books include Competition Law and Policy in New Zealand (Law Book Company, 1991), Law and Religion (Ashgate, 2000), Worlds Colliding: Conservative Christians and the Law (Ashgate, 2001), Shari'a in the West (Oxford University Press, 2010, with Nicholas Aroney) and Religious Freedom in the Liberal State (2nd edition, Oxford University Press, 2013, with Ian Leigh). He has published articles in the Antitrust Bulletin, Journal of Contract Law, Journal of Church and State and Journal of Law and Religion. His research interests include religious freedom, church and state, family law and antitrust law.

JOHN STENHOUSE is Associate Professor of History at the University of Otago. In 1996 he was Visiting Fellow at the Institute for Research in the Humanities at the University of Wisconsin-Madison. He is coeditor of Science and Theology: Questions at the Interface (T. & T. Clark, 1994), Disseminating Darwinism: The Role of Place, Race, Religion, and Gender (Cambridge University Press, 1999) and Building God's Own Country: Historical Essays on Religions in New Zealand (2004). He has published scholarly articles appearing in the New Zealand Journal of History, Journal of Religious History, Pacifica: Australian Theological Studies, Journal of the History of Biology, Metascience, and the Journal of Law and Religion.