History of New Zealand and its Inhabitants 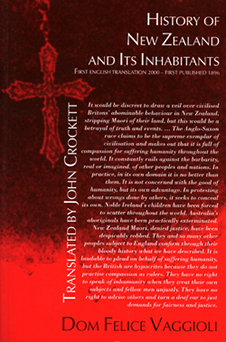 An extraordinary new book reveals sympathy for Maori from an unusual supporter – an Italian priest. The book has waited over a century to be translated into English, but sits comfortably alongside the contemporary Maori renaissance and claims to the Waitangi Tribunal.

The book was originally published in Italy in 1896. Its author, Dom Felice Vaggioli, was one of the first Benedictine priests to be sent to New Zealand. He worked in Gisborne, Auckland and the Coromandel from 1879 to 1887. While in New Zealand, he gathered information, including first-hand accounts of Treaty of Waitangi signings, and of the Taranaki and Waikato wars.

On his return to Italy, Vaggioli responded to numerous requests (including a Papal directive) for information about New Zealand by writing this History. The result is a document that is unique in our nineteenth-century literature, a lively, opinionated and potentially controversial book, which anticipates by nearly a century the writings of people like Ranginui Walker and Claudia Orange. While his anti-British and anti-Protestant bias is evident, Vaggioli rigorously backs up his arguments with quotes from numerous sources.

History of New Zealand has languished in obscurity until now, because it has been available in Italian only, and also because only a handful of copies of the original edition have survived. Most of the Italian edition was destroyed at the beginning of the twentieth century, following pressure from the British government, due to the work’s severe criticism of British colonial policy.

Had it not been for a chance occasion, the book might have remained relatively unknown. A few years ago John Crockett was doing some research in the archive of the Auckland Catholic Diocese when the archivist, Rev. Bruce Bolland, showed him an old book in Italian – Storia della Nuova Zelanda. It quickly became apparent to Crockett that he should translate the book into English, as it provided a unique interpretation of the impact of colonisation on the Maori.

Vaggioli’s writing style is dramatic and racy, and Crockett has retained this in his translation. The book is a terrific read of nineteenth century New Zealand history. Anyone interested in Māori–Pākehā relations or the history of colonisation will want to read this remarkable source.

DOM FELICE VAGGIOLI (1845–1921) was a Benedictine monk from Tuscany. As a youth he was a conscientious objector, avoiding compulsory military service by hiding in a region which was under Austrian rule. He began his novitiate in 1864 and was professed a religious the following year. In 1876 he was sent as a missionary to Tunisia, and three years later to New Zealand.

Vaggioli was first appointed parish priest in Gisborne, and was entrusted with the job of clearing the parish debt. He then performed similar tasks at St Benedict’s church in Newton, Auckland. However, the stress of debt collecting resulted in his health deteriorating and after a brief holiday he was appointed to Coromandel. In 1888, after his return to Italy, he assumed the important post of Abbot Visitor of the Italian province of his order, until 1896 when he ceased this role to concentrate on his writing. From 1910 until his death he occupied the prestigious position of Superior of San Giorgio Maggiore monastery in Venice. Vaggioli was known for his austerity, intellectual curiosity and frankness.

JOHN CROCKETT was born in Auckland in 1946 and attended Holy Name Seminary in Christchurch to begin studies for the Catholic priesthood. He then spent four years at Propaganda Fide College in Rome, where he received a theology degree and was ordained as a deacon, but decided not to become a priest. On returning to New Zealand he completed a BA in history and Italian and an MA in applied sociology. He has worked as a social worker and counsellor and currently works at Student Health at the University of Auckland. His translation of Vaggioli’s autobiography A Deserter's Adventures was published by Otago University Press in 2001, and he is also working on an historical novel, Nga Roimata, based on the journey of two students, Māori and Pākehā, who were sent to Rome by Bishop Pompallier in the mid-nineteenth century.