Treasures from the Hocken Collections 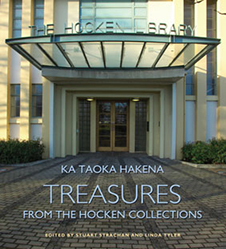 In 1907 Dr T.M. Hocken of Dunedin – historian, bibliographer and collector – undertook to gift to the University of Otago his magnificent collection of books, manuscripts, paintings and other historical documents relating to New Zealand and the Pacific.

Published to celebrate the centenary of the Hocken Collections' Deed of Trust, this book documents almost 200 items, dating from the seventeenth century to the present day, photographed by Bill Nichol. These include historical and modern paintings, photographs and drawings, maps and plans, books, newspapers and posters, sheet music, sound recordings and early New Zealand manuscripts. Many items relate to Maori history.

Including introductory essays on Dr Hocken and the development of the collections, the book stands as a tribute to the generosity of the Hocken Collections' many benefactors. This book will be both a surprise and a delight to all readers.

The Hocken Collections owes its existence to the vigorous collecting and subsequent generosity of a Dunedin doctor, Thomas Morland Hocken (1836–1910). Hocken worked as a ship’s surgeon between England and Australia until settling in Dunedin in 1862.

Hocken applied his drive and talent to the acquisition of books, newspapers, maps, pamphlets, photographs, pictures and artifacts relating to New Zealand, the Pacific and early Australia. He shared his knowledge widely through lectures, exhibitions, his own books and writings and the important Bibliography of the Literature relating to New Zealand, published in 1909.

In 1897, Dr Hocken offered his fine collection to Dunedin and the people of New Zealand. Public subscription lists opened in 1906, and a Deed of Trust was drawn up by which the Hocken Collection was housed in a special wing added to the Otago Museum, and managed by the University of Otago in trust for the nation. Too ill to attend the opening on 23 March 1910, Dr Hocken died two months later.

STUART STRACHAN, who trained as an archivist, has been Hocken Librarian since 1985, having first worked at the Library from 1968 to 1977. He is currently an inaugural member of the Archives Council of New Zealand.

Educated as an art historian, LINDA TYLER was Curator of the Pictorial Collections at the Hocken Library from 1998 to 2006. She is now Director of the Centre for New Zealand Art Research and Discovery, University of Auckland.

'National treasure ... The university is to be commended for the artistry with which they present these precious things – the volume makes accessible to wider audience treasures already viewable to all.'  – Sunday Star Times, February 2008

‘At first brush the concept of the book seems interesting, the ideal coffee-table book which can be picked up and any page flicked to but what the reader soon finds is that they are hooked into following a carefully constructed journey … An absolute must for all New Zealand libraries.’ – New Zealand Library and Information Management Journal, Vol. 50 No. 4 2008

'This highly informative book gives the rest of the country a glimpse into the wealth of treasures the Hocken collection now contains' – Art News, Summer 2007

'a beautiful book ... something the whole country can be proud of' – Speaking Volumes, National Radio, 2 November 2007