The Story of Oamaru Harbour 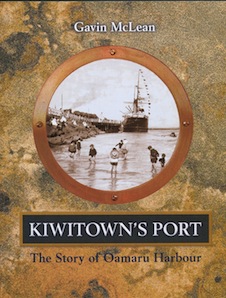 ‘Colonial New Zealand depended on sea transport. Every major or aspiring centre had to have a port. At different times, and with different casts of characters, similar stories were acted out throughout New Zealand. You can tick them off – from siting and building the port right through to our modern worries about balancing the competing demands of conservation and development, and of commercial, recreational and residential users.’

Located on the east coast of New Zealand’s South Island, Oamaru harbour struggled to become a safe haven. Yet it became an example of the ‘progress industry’ that reshaped the country’s destiny in the pivotal 1860s and 1870s, an archetypal rural servicing town, manufacturing centre and port. Today viticulture, dairy farms and farm-stays characterise its region but the tides still roll in and out of the harbour, which in turn has become a heritage centre, recreation space and tourist venue.

GAVIN McLEAN, senior historian at the Ministry for Culture and Heritage, has written many books, including The Governors (2006), How to Do Local History (2007) and Oamaru 1878: A Colonial Town (2006). Other recent books include Frontier of Dreams (co-edited with Bronwyn Dalley) in 2005 and Heartlands: New Zealand Historians Write About Places Where History Happened (co-edited with Kynan Gentry) in 2006.