Lenin's Legacy Down Under 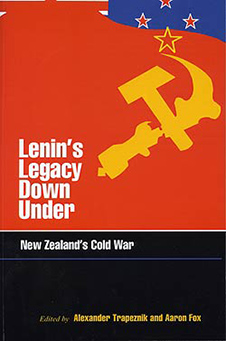 Although described by Lenin as 'the country at the end of the world', like other western countries New Zealand was a participant in the defining ideological conflict of the twentieth century and there are stories to be told as a result.

The range of scholars and commentators contributing to the book is impressive. Aaron Fox reassesses the high-profile espionage cases against New Zealanders Ian Milner and Dr 'Bill' Sutch. Gerald McGhie reflects on his experiences of diplomatic service in Moscow, including a posting as Ambassador during the demise of the Soviet Union.

Anne-Marie Brady analyses New Zealand's relations with the People's Republic of China from 1949 through to the 1970s, including the roles of Rewi Alley and his supporters, and the Communist Party of New Zealand. This chapter also examines official attitudes towards the People's Republic of China, and provides an excellent case study of the international relations of a small nation, such as New Zealand, in the midst of the US–Sino hostility of the Cold War era.

Alexander Trapeznik examines the connections between the Communist International in Moscow (Komintern) and the Communist Party of New Zealand, and the degree to which Moscow directed and financed the policies and activities of New Zealand communists in the 1920s and 1930s. John Goodliffe examines Soviet commentaries on New Zealand, including social and political observations written in the 1950s and 1960s.

ALEXANDER TRAPEZNIK is Associate Professor of History at the University of Otago and is executive director of the University's Centre for Public History. He has also edited Common Ground? Heritage and Public Places in New Zealand (2000).

AARON FOX is an independent historian with a special interest in New Zealand's military, diplomatic and environmental history.